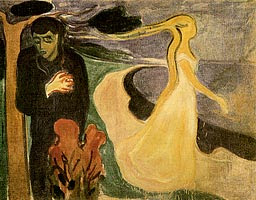 Most people, even those who are not terribly interested in art, are familiar with at least one of Munch’s works, “The Scream”. It has been copied, parodied and has ended up in several contemporary television advertisements (which I find despicable, but not very surprising). Of course, Munch has a very large body of work, many of which can be seen at this web site.

As with many artists (such as Van Gogh and Paul Gauguin), Munch the person is about as fascinating as his paintings. His early works, such as "Morning, Girl at the Bedside" appear to have many similarities to other masters of Impressionism. Many of his later paintings are very oppressive and speak of torment and suffering. The faces of his subjects begin to blend into the background, to such an extent that they actually have no discernable facial features, such as in “Anxiety”. Many of his paintings are autobiographical, such as “The Death Chamber” and “By the Deathbed”, which show his family gathered around Edvard’s sister, Sophie. as she lay dying.

“The Scream” is, of course, Munch’s central work, and I find it fascinating. Munch’s described the basic experience behind the painting as follows:

I walked one evening on a road - on the one side was the town and the fjord below me. I was tired and ill – I stood looking across the fjord – the sun was setting – the clouds were colored red – like blood – I felt as though a scream went through nature – I thought I heard a scream. – I painted this picture – painted the clouds like red blood. The colors were screaming.

That sounds very much like someone that is deeply troubled. Usually, when people see a very vibrant sunset, they find it beautiful and uplifting. Munch found it painful and reminiscent of blood. "The colors were screaming." That is a very evocative description and gives quite a bit of insight into Munch's pysche. Munch apparently agreed. In Munch’s handwriting in the upper red area of the painting is written:

Can only have been painted by a madman.

As an aside, this painting was stolen from the museum in Oslo in 2004 by masked gunmen who just stormed the museum with drawn guns and made of with this and one other painting. It was later recovered unharmed.

Information from “The Masterworks of Edvard Munch”, Museum of Modern Art, New York was used in this post.
Posted by zeppo at 7:41 AM