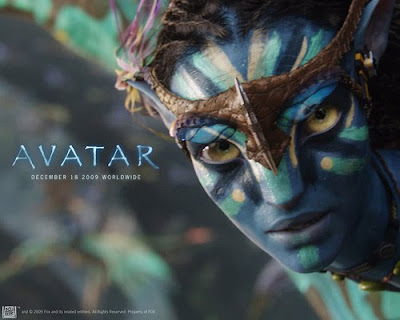 Sort of a combination of Star Wars: Return of the Jedi, Aliens, Dances with Wolves, Disney's Ferngully and maybe one or two episodes of Star Trek TOS thrown in for good measure. The special effects and computer animation was absolutely outstanding and this is the first movie in 3D that I have seen. (My eyes don't work really well together, so I have never been able to watch those 3D movies with the red and blue glasses.) It was pretty dang neat. The imaginative scenery and plant and animal life on the planet were captivating. The storyline itself was a little silly, overly simplistic and more than a little predictable. However, I found it very interesting that by the end of the film, you were rooting for the blue people from an alien world and against the villainous sky people, who just happen to be from Earth. This made for an interesting "teachable moment" while driving home with my 14 year old daughter, to whom I have been introducing the idea of movies as metaphors. I explained the whole "Godzilla as a metaphor for the atomic bomb" one to her a while ago. Actually, I just asked leading questions and let her provide her own answers. "Who did the blue people remind you of? That's right, the Indians!" I didn't even have to point out the horses and bows and arrows. So, it was nice to be able to do that. She was actually the one who brought up the issue of predictability. I was rather proud of her to recognize that.

I won't bother with any sort of substantive review here, as it has been done already in numerous places. It was certainly worth the time and money, which is certainly more than can be said of many recent films. It better have been, considering how much James Cameron spent to make this thing.

Image from Official Avatar The Movies Wallpapers By NOSHOMAX
Posted by zeppo at 5:56 AM