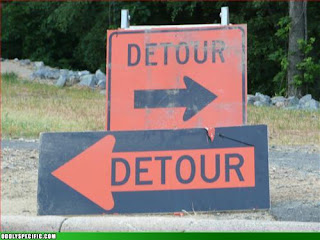 I'm sorry, but I seem incapable of writing anything. "Not being able to write" and "blogging" don't really seem to fit all that well together. Sort of like "wanting to be an actor" and "being overcome with stage fright." It doesn't really work.

I suppose part of this is due to the fact that my job mostly entails reading and writing stuff, all day long. It's rather difficult to work up the enthusiasm anymore to come home after work or get up in the mornings on the weekend and think, "Hey, I really want to write more stuff!" After eating spaghetti three meals a day for six weeks straight, you really don't want to have any more fu*king spaghetti.

But my big problem, as I have said before, is I am just overcome with the vapid stupidity (is there another kind?) of our society, and the devisions within in it that don't even seem to dwell in the same reality as each other, much less talk coherently and be able to find common ground. Facts are not facts anymore.... Facts are subject to whether or not they fit in with your current philosophy. Facts are now just heartfelt opinions. There is data out there on the internet that supports any damn position that you would like to take. Earth is warming up? Sure, there's lots of data to support that. Earth is cooling down? Yep, there's data for that. Unless someone takes the time to go track any piece of data (which I guess would be a datum) that they are using back to its original source, then you just stop looking when you find something that works for you. We have gone way past that old joke about lies, damn lies and statistics. You can no longer try to use data and facts to try to convince someone of the validity of your argument, because the person you are arguing with is probably armed with more "facts and data" than you are that are in complete opposition.

Is there even any such thing as "truth" anymore? Was there ever such a thing? I always believed there was. However, I am coming to believe that I was wrong. I have degrees in engineering and physics. There is a certain kind of thinking that is required to get a degree in engineering, one that starts with a set of facts or data that everyone can agree on in order to come up with a solution to any particular problem. But now, all that's out the window. It's like you got every single answer to your final exam wrong, just because your professor disagreed with your starting data points. "The Laffer Curve tells you everything you need to know about taxation!" "No, the Laffer Curve is widely discredited!" What is it? It depends on what you go read and want to believe in the first place.

The consequences of these dueling sets of realities is that the two sides, or however many there are, will never, ever be able to agree on anything. Never. We are all now obligated to view whatever facts and data might pop up in front of our faces through the filter of our already preconceived notions. It is fits, then great. We can absorb that new one for future use. If it doesn't fit, then you toss it out without thinking anything further about it, or else maybe chalk it up to the partisanship of the "other side," who are obviously a bunch of malicious liars and/or complete morons.

In my universe, Sarah Palin and Glenn Beck are morons, Beck is more unhinged than Palin, but morons all the same. Others, however, think that both of them are saviors and conveyors of the absolute and unvarnished truth. How can this be that people can have this big of a difference of opinion about something that I think is so cut and dried? How could ANYONE with an education over about the fifth grade thing that Sarah Palin is anything other than a lazy attention whore who usually has no idea what they hell she is talking about? It's beyond me, other than to go back to my original assertion that there are no absolute truths anymore. There is no such thing as unbiased, rational thought. Every single thing must be seen through the filter of preconceived ideas before any sort of judgment is passed. If your particular reality requires that Sarah Palin is some sort of Goddess for Truth, Justice and the American Way, then that is what she is.

This is not how I think a civilized, thoughtful society should function, but that's how it goes these days, even for most of our mass media. And without a responsible mass media that doesn't use those same filters as their target audience, I must admit, there is very little chance of this country ever having a knowledgeable population that elects intelligent and knowledgeable people to political office in order to solve the huge problems facing this country if our society that does not have an active, truthful media that will accept the notion that they are there to help uncover the truth and not just to report that every story has two sides. No, partially because of our incompetent media that loves conflict, juicy scandal and playing to the audience in order to make as much advertising dollars as they possible can for their corporate masters, we can't even agree on whether things are even problems anymore, much less come up with ways to fix them.

To get back to my original starting point for this point, it is a very long way of saying, of course, that it is extremely difficult for me to blog about much of anything anymore when I have completely given up hope for our society. I have absolutely no idea where it might be headed. It could be headed for some 1984-esque world where facts are things to be manipulated and no dissent or even appearance of non-conformity is tolerated. We could be headed for some complete meltdown of orderly society when global climate change disrupts our food and energy supply and distribution to the point that we have no functional government at the national or even state level, a la The Road Warrior or the myriad of other post-apocalyptic films of the past 40 years. We could keep stumbling around just like we are, slowly sinking into the morass of our own stupidity and inability to see past the ends of our collective noses in order to maintain the purity of whatever vision of reality to which we subscribe. It could be a combination of little bits of all of those, or it could be something completely different. Probably the one thing that won't happen is what everyone was worried about in the 50's and 60's, there won't be a global thermonuclear exchange by two or more superpowers that wipes civilization off the face of the planet. That's probably not going to happen anymore. But, whatever happens, I firmly believe 1) it isn't going to be pretty, and 2) nothing we can do now can change it and only part of that is due to the fact that we don't want to change it.

So, that's why my blogging has fallen off to a whisper these days. It's pretty difficult to write something snarky or insightful or hopeful or full of passion if I have given up hope. What's the point? The last few weeks, I have engaged in active isolationism, and I have found myself being a lot less unhappy, frustrated and angry than I have been. If our society wants to commit suicide by mass stupidity, then who am I to complain about it?

I am just going to go bury my head in the sand over here for a while. Poke me in the butt if something happens that you think I might need to know about.
Posted by zeppo at 8:03 AM