If the country is in such a state of crisis, why is increasing taxes on upper 2% off the table? 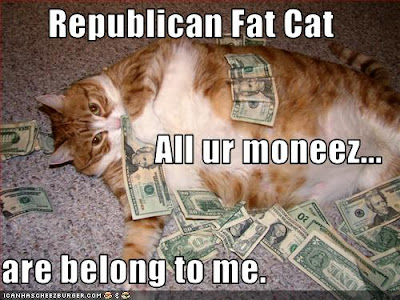 And why can't we make corporations pay their taxes? That seems to be all that those who are supposedly "in charge" can agree on; we can't increase taxes on rich folks and we can't make corporations pay their taxes. That's it. We could NEVER allow that, for some odd reasoning. And forget oversight and regulations! Heck, the invisible hand of the market will take care of any abuses by insurance companies or major polluters...

But yet, when it comes to everyone else, boy, everything is on the table. Takeaways in wages and benefits, raising the retirement age, doing away with Medicare, Medicaid, "privatizing" Social Security, breaking unions, laying off teachers, government workers, police, etc... Anything and everything that can be heaped upon those who actually have to work to survive and make ends meet is automatically something that "must be done" in order to avoid this future catastrophe.

How did this happen? Why is this country so obviously set up to benefit rich people and richer corporations? Aren't those the very people who have benefited from living in such an open and democratic society? When did actual people become the enemy that must be vanquished?

I suppose this is THE major issue of the day that I do not understand. What the heck is this country for if not to benefit all who live here? Why is it that the powerful always seek more power and the rich will never be satisfied with all the riches they already have? They must have it all, even to the detriment of the rest of the 95% of the country? Is that what this is really about?

I am becoming more and more disenchanted with human beings as a species every single day. I am very attached to very many individuals. I am really becoming to detest my species, however.

UPDATE: Check this out from Whiskeyfire:

US corporations resented that arrangement, and after the war, they changed it. Corporate profits financed politicians' campaigns and lobbies to make sure that income tax receipts from individuals rose faster than those from corporations and that tax cuts were larger for corporations than for individuals. By the 1980s, individual income taxes regularly yielded four times more than taxes on corporations' profits.

Since the second world war, corporations have shifted much of the federal tax burden from themselves to the public – and especially onto the middle-income members of the public. No wonder a tax "revolt" developed, yet it did not push to stop or reverse that shift. Corporations had focused public anger elsewhere, against government expenditures as "wasteful" and against public employees as inefficient.

Organisations such as Chambers of Commerce and corporations' academic and political allies together shaped the public debate. They did not want it to be about who does and does not pay the taxes. Instead, they steered the "tax revolt" against taxes in general (on businesses and individuals alike). The corporations' efforts saved them far more in reduced taxes than the costs of their political contributions, lobbyists' fees and public relations campaigns.

If Republicans and conservatives yearn for the "good old days", how about we take a step back to the 1940's on this issue? That's when America was truly great, wasn't it? When we were exceptional? How about American corporations start sharing the load?