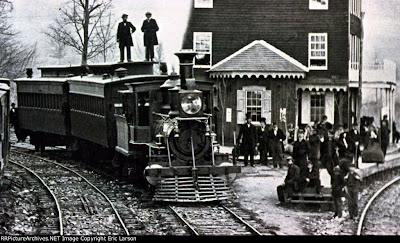 This is Abe Lincoln's Presidential train at Hanover Junction, Pennsylvania. Lincoln is the man in the middle of the photo in his famous tall black hat. President Lincoln stopped in Hanover Junction on November 18, 1863 before traveling west to Gettysburg, PA. This picture was taken the day prior to President Lincoln's now most famous speech, "The Gettysburg Address". It was also about four months after the infamous Battle of Gettysburg.

Last year, I was in Washington, D.C. One of the things I have always wanted to see was Ford's Theater. Unfortunately for me, the theater itself was closed the day I was there. But the basement museum was open. I was speechless when I was looking at the pistol John Wilkes Booth used to kill Lincoln in cold blood. There was a rather smallish looking boot split up the middle which turned out to be Booth's. The doctor that was sheltering him had to cut it off of Booth, as he severely injured his ankle in his infamous jump off from Lincoln's box to the stage. And, really rather on the morbid side, there was a pillow used in the house across the street where Lincoln was taken, complete with blood stains.

But what really got to me was when I did go over to Peterson House across the street, which is where the President was taken after he was shot and where he ultimately passed away. Although all the interior furnishings has been replaced since that time, it has been reconstructed as faithfully as they could. That was when I got rather emotional, being in the same room where President Lincoln died. That was some In Your Face history, let me tell you. I really want to go back and see the theater when it is open.

This photo is copyrighted by Eric Larson. Please go visit his railroading photo album. Click on the photo for a bigger version.

UPDATE: I was thinking that you could consider this train the Air Force 1 of its day.
Posted by zeppo at 11:24 AM