More thoughts on hypocrisy and the Republican Party’s litmus test 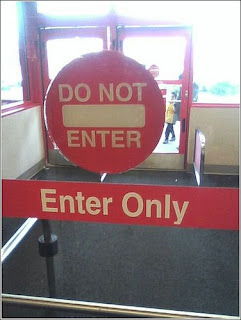 I hadn’t really intended, in the post below, to really get into the morality of abortion. However, the volatility of the issue kind of makes avoiding that discussion impossible. My single commenter on that thread went that way, in any event. What I had intended to discuss what the fact that the Fundamentalist Christians and other groups opposing abortion demand lock step adherence to their views before they will support that candidate. After all, George Bush and Karl Rove have been telling people for the last six plus years that religious views SHOULD guide their voting patterns. So, many voters are taking that message to heart. They are expecting, without any equivocation at all, that their candidates support their views and only their views.

In today’s Washington Post (registration required), E. J. Dionne has a column that touches on what I did in my post of last week. That is, Rudy Giuliani came out in support of a woman’s right to choose regarding that most sensitive of subjects. Now, he is going to be in hot water with the anti-abortion folks in the Republican Party. Or else, he should be, if they don’t want to be seen as complete hypocrites (which I also mentioned in my response to my commenter).

If he sticks with his decision, Giuliani will end the free ride his party has enjoyed on an issue that's supposed to be about morality but has more often been used cynically to harvest votes.

Giuliani will also test the seriousness of those who claim that abortion is the decisive issue in the political choices they make.

Bush has been a master at insisting on his devotion to "the culture of life" while avoiding hard commitments that might offend advocates of choice. His crafty approach paid substantial dividends in the 2004 election.

Given these numbers, how did the antiabortion candidate win? Bush took three-quarters of the votes cast by abortion opponents, but he also managed to get the votes of one-third of those who favored legal abortion -- meaning that his artful hedging worked. Republicans would love to keep that game going.

Will conservative Catholic bishops and intellectuals, along with evangelical preachers and political entrepreneurs, be as tough on Giuliani as they were on John Kerry in the 2004 presidential campaign? If they are not, how will they defend themselves against charges of partisan or ideological hypocrisy?

He knew this position could not stand, so by the end of last week, he had reaffirmed his support for abortion rights and extolled the fact that Americans "understand how to respect each other's differences."

That's true, unless a liberal Democrat happens to take exactly the same position as Giuliani, and happens to be a Catholic, as Giuliani is. Yes, the heavens came down upon John Kerry.

This is the point that I really would like to bring out. Truthfully, I am not totally certain I have a firm position on abortion. I believe I am much more on the “pro-choice” side of things, but I can also see why someone else would see it differently. But here is what irks me about this discussion. If the Republican party really wants to do something about this issue, then they should shut the heck up and DO IT, instead of dragging it out of the cupboard every two/four/six year election cycle and assaulting their opponent with it, when they have absolutely no intention of actually following through on actually doing anything. The entire debate in this country today is a tool, a device, in which politicians can get their supporters energized and attract more potential supporters who care only about that issue. The politicians in charge don’t really care about this. I just wish that many of the Republican voters would see this as well. I am not asking that they vote Democratic. I am just asking them to wake up to the fact that they are being manipulated by a bunch of cynical and devious politicians who desire nothing else that to retain their power with whatever means available.

That is the issue that I would like to see openly discussed, and it really has nothing at all to do with the morality of the pro-choice/anti-abortion debate.
Posted by zeppo at 4:43 PM

Labels: government out of control, lying scumbags, media not going the job