Dem vs. Repub televised debates, and what they say about the parties in general. 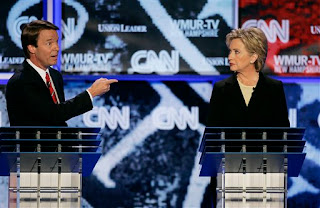 First off, I must make it abundantly clear. I, most emphatically, do not watch televised political debates. Within a few minutes, I get so annoyed I have to leave or else I might end up doing something rash, like throwing the television out the window or moving to Canada. I think the last full presidential debate that I watched was, and this pains me to acknowledge how long ago this actually was, Jimmy Carter vs. Gerald Ford. I was so absolutely annoyed at both of them at the end of the evening, I couldn’t stand it. Neither one of them would answer the question that was asked. They just trotted out a favorite slogan or sound bite that was sort of in the same ballpark as the question that was asked. But not necessarily. That was it for me.

Given this rather severe limitation regarding televised political debates, I find myself reading the media punditry the next morning and listen to what they have to say about the analysis of what actually occurred, as well as seeing the mandatory declaration of “who won the debate”. Funny, I thought debates were just to let the voting public know where the different candidates stand on various issues. “Winning” is so ingrained into our culture these days that it is impossible to have any sort of activity involving two or more individuals without declaring someone the “winner”. One of the main selling points on a new ad on television about riding lawn mowers seems to be that you can beat your neighbor when it comes to mowing your yard faster than he can.

But I digress. Which I am prone to do. Here’s what I have gathered so far about some of these televised debates.


The Dems talked about:
- What the vote for or against the funding bill for the conflicts in Iraq and Afghanistan actually meant.
- Criticizing each other for not pressing the President harder to bring the war in Iraq to a close.
- Discussing (but not particularly advocating actually doing anything about) the genocide in Dafur.
- The “don’t ask, don’t tell” policy regarding gays in the military.

There were some other subjects, but it seems that these were the biggies.

Here is what I gathered the Republicans talked about in their last debate.
- Immigration, as is, who is against illegal immigrants the most and who would build the biggest wall?
- How much tougher each person in the debate is than all the others regarding torturing people suspected of terrorism, plotting terrorism, or thinking of terrorism in a vague sort of way. Mitt Romney wants to double the size of Guantanamo, so that terror suspects “don’t have access to lawyers”. Only John McCain came out as being against legalized torture of someone who has not yet been charged with a crime.
- Who could be make the “tough decision” when it comes to bombing Iran?
- Which candidate does or does not believe in evolution (hands up, please).
- The influence of Bill Clinton on the White House, if Hillary were to win on the Democratic side.
- John Edward’s $400 haircut and, since that proves he is a “girly-man” because of that, is somehow unqualified to be president.

Apparently, Ron Paul on the Republican side threw in some very interesting comments and observations, which everyone ridiculed. Rudy Giuliani thought it insane that anyone could actually think that terrorists might attack the United States based on the actions over the last 25 years of said United States. Apparently, everyone knows that terrorists “hate freedom” and anyone who says anything different is probably a liberal. Poor Ron Paul. There’s no way in hell that he will get anywhere close to winning a single primary. He is now a permanent member of the “Blame America First crowd”.

Several things that were apparently noticeable by the lack of their presence in the debate are how well our current policy in Iraq is going, and how much they back President Bush these days. Illegal wiretapping, anyone?

So, given the national stage that is given to these bunch of people, who for their own reasons, want to be the president of (currently) the most power nation on the planet, what they choose to talk about is very revealing. Who believes in evolution? Please!! Bill Clinton? What, again? It doesn’t take much of a genius to see which party was actually trying to address the issues (maybe not very successfully, but at least the topics came up in the discussion) and which party was pandering to the lowest common denominator of those who vote in the party primaries.


UPDATE (prior to actually publishing this post, but after I wrote it): I swear, I wrote this post prior before I stumbled across this column by E.J. Dionne. Same topic, tho....
Posted by zeppo at 4:24 PM