The Ceiling Cat Bible, plus a couple of other alternative Bibles 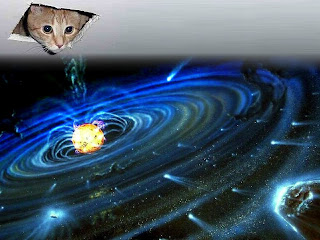 My apologies to those who might be offended by this, but I am of the opinion that religion, just like all other things in life (including death) should be laughed at. I offer several different versions of the Bible, because that King James version has been around for quite some time. Here, for instance, is the Ceiling Cat Bible version of Genesis, written in LOLcat prose. This is just one small example of the learning you might find therein.

1 Oh hai. In teh beginnin Ceiling Cat maded teh skiez An da Urfs, but he did not eated dem.

2 Da Urfs no had shapez An haded dark face, An Ceiling Cat rode invisible bike over teh waterz.

3 At start, no has lyte. An Ceiling Cat sayz, i can haz lite? An lite wuz.

4 An Ceiling Cat sawed teh lite, to seez stuffs, An splitted teh lite from dark but taht wuz ok cuz kittehs can see in teh dark An not tripz over nethin.

5 An Ceiling Cat sayed light Day An dark no Day. It were FURST!!!1

6 An Ceiling Cat sayed, im in ur waterz makin a ceiling. But he no yet make a ur. An he maded a hole in teh Ceiling.

8 An Ceiling Cat sayed, i can has teh firmmint wich iz funny bibel naim 4 ceiling, so wuz teh twoth day.

11 An Ceiling Cat sayed, DO WANT grass! so tehr wuz seedz An stufs, An fruitzors An vegbatels. An a Corm. It happen.

12 An Ceiling Cat sawed that weedz ish good, so, letz there be weedz.

13 An so teh threeth day jazzhands.

14 An Ceiling Cat sayed, i can has lightz in the skiez for splittin day An no day.

16 An Ceiling Cat doeth two grate lightz, teh most big for day, teh other for no day.

17 An Ceiling Cat screw tehm on skiez, with big nails An stuff, to lite teh Urfs.

20 An Ceiling Cat sayed, waterz bring me phishes, An burds, so kittehs can eat dem. But Ceiling Cat no eated dem.

21 An Ceiling Cat maed big fishies An see monstrs, which wuz like big cows, except they no mood, An other stuffs dat mooves, An Ceiling Cat sawed iz good.

22 An Ceiling Cat sed O hai, make bebehs kthx. An dont worry i wont watch u secksy, i not that kynd uf kitteh.

This web page invites everyone to take a shot at "updating" the Bible until it is completely done in LOLcat. I find the concept pretty amusing, but that might get JUST A BIT tedious after about three pages....

And here, for a radical change of pace, are some highlights of the Stinque Zombie Bible.

Genesis 1:1 In the beginning God made the heaven and the earth and the Zombies sprang forth from the roiling foam of creation, barking in uncontrollable rage, hungry for human flesh to eat and pestork, giving pause to our Lord who shat himself and uttered 'Oh, f**k' amidst the primordial celestial gloom.

Judges 5:6 In the days of Shamgar the son of Anath, in the days of Jael, the highways were unoccupied, and the travellers walked through byways, whereas the zombies sped through using EZPass.

Job 2:2 And the LORD said unto Satan, "Where the HELL did you come from? ha ha ha, that joke never gets old. Two drink minimum."

Psalms 1:1 Blessed is the man that shuffleth not in the gait of the zombies, nor standeth and stareth at nothing in the way of zombies, nor eateth the brains of the scornful.

Matthew 5:5 Blessed are the meek: for their brains shall be eaten first.

Here’s the Un-Bible. This one needs some work, methinks. (I was going to do some selective editing, as I think #2 below is quite a bit racist, probably unintentionally so. But if I did that, the whole thing loses whatever coherency it has. So I'll leave it as is, with the caveat that I didn't write this.)

In the beginning, as a failed attempt at making humans, God created aliens. However, God was unhappy with because:

2. They all looked the same.

3. They don't believe he exists.

For these reasons, he banished them all to Space (hence its dense population). that's why most of Space's population is athiest and will not believe in this page.

Chapter 2, back to the drawing board.

God ,after realizing his mistakes, remade the alien but instead of big eyes he slanted them and made them see through gave them slits,(eyelids) and called them chinese, however after a few months the medical bills and lawsuits started pilling up, guess they were walking and falling into everything, dammit said god ,and not willing to give up sent them to build a great wall to keep them safe inside.

after 2 assnumbing failures god decided he needed a spy so he created a four legged friend for his next project , a rere-atempt at the human, guess he didnt trust the slimy f**ks, why do you think your dogs always around , hes droppin the dime on ya homey.