I just saw a clip where George Bush said, in a very loud and angry voice, “We do not torture!” 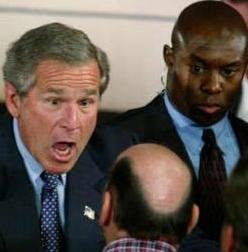 God, what a liar this person is. The four newly released torture memos give specific details about how to go about torturing someone. The only logic, however flawed, involved in the Bush administration’s position is that, since it is obvious that we don’t INTEND to torture anyone, then, by definition, it isn’t torture! We even have a doctor on the scene, so that proves beyond a shadow of a doubt we care mightily about the overall health of the person being interrogated. See how easy it is?

Republicans seem to be able to rationalize anything these days.
Posted by zeppo at 8:38 AM