The problem with ignoramuses is that they don’t know they are ignoramuses. 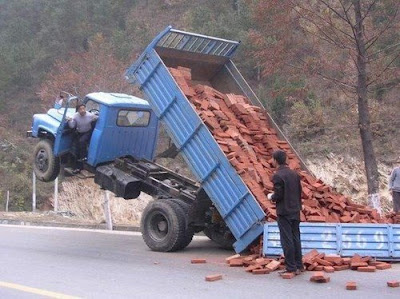 I suppose it is stuff like this that bugs me the most about Republicans and conservatives these days. They think they are brilliant when, in fact, they have about as much on the ball as a bag full of hammers. Michelle Bachmann is a really good example. Last month, she lectured Congress about how carbon dioxide is “natural” and therefore really good for us. It therefore can’t cause global warming.

Here’s someone else that I have never heard of before, but you can be sure he is a Republican, making really stupid statements about global climate change. From Washington Monthly:

"This whole thing strikes me if it weren't so serious as being a comedy, you know. I mean, we just went from winter to spring. In Missouri when we go from winter to spring, that's a good climate change. I don't want to stop that climate change, you know. Who in the world want to put politicians in charge of the weather anyways? What a dumb idea. [...]

"Some of the models said that we're going to have surf at the front steps of the Capitol pretty soon. I was really looking forward to that. [...]

"We've been joined by another doctor, a medical doctor but also a guy who graduated from high school science as well, from Georgia, my good friend, Congressman Gingrey.... So to have actually a guy who's passed high school science is tremendously helpful. And Dr. Fleming from Louisiana."


These people aren’t even smart enough to recognize the fact that they don’t really know anything about the subject. That happens to us all the time. No one can be an expert in everything (except for Dr. Benton Quest, which is probably the subject of a future post), so not knowing something about a specific subject, especially technical or scientific, is nothing to be ashamed of. However, when rational people realize they are in that situation, they usually keep their damn mouths shut so as to not make total jackasses out of themselves. Yet, here are these elected officials making pronouncements delivered as if they were Zeus standing astride Mt. Olympus. And to make this guy look even stupider, he is standing up there, bragging about his friend that passed high school science! THAT makes someone an expert on global climate change!?!

It occurs to me that even a hard-core Republican ideologue should pay attention to a person banging on their front door at night, yelling at them that their house is on fire, even if the person banging on the door is known to be a Democrat. Yeah, you might not trust Democrats. But the situation they are being warned of is pretty dire, so regardless of who might be delivering the message, they better get their butt out of bed to go check out if their house really is on fire. But no. These clowns would prefer to pull the blankets up under their chins and tell their bed partner (whoever that might be, which is also may be the subject of a future post) about what idiots Democrats are. Their house couldn’t POSSIBLY burn down, because God won’t let it burn down! Or because flames are natural so therefore, flames are good for us! Or how burning houses are all a liberal plot to destroy the economy.