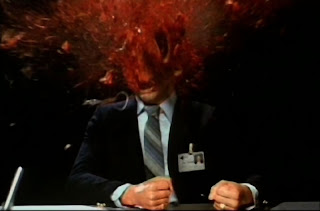 Wow. As many people are saying this morning (even the White House, apparently), "My, that was unexpected." I tend to agree. I am not sure that an award of this stature should be given just for a general sense of changing the direction of the country and its standing in the world. It seems like it should be given for some breakthrough moment, such as signing an Israeli/Palestinian peace accord, or something along those lines. So, in that context, I think some criticism of this award may have some merits.

On the other hand, it's certainly going to be fun to watch wingnut heads explode, like some mass viewing of Scanners or something, for the next few days. Oh, the outrage! After all, it's rather difficult to give a Nobel Peace Prize to someone who is JUST LIKE HITLER!

UPDATE: I saw where some commenter at DailyKos said "It sounds like the, 'Boy, is the world relieved you guys didn't choose McCain' award."

For all the recognition of George W. Bush's unpopularity, it's easy to overlook the ways in which the international community was truly mortified by the U.S. leadership during the Bush era. The irreplaceable leading nation could no longer be trusted to do the right thing -- on use of force, torture, rule of law, international cooperation, democratic norms, even climate change. We'd reached a point at which much of the world was poised to simply give up on America's role as a global leader.

And, love him or hate him, President Obama changed this. I doubt anyone on the Nobel committee would admit it, but the Peace Prize is, to a certain extent, an implicit "thank you" to the United States for reclaiming its rightful place on the global stage.

It's indicative of a degree of relief. Much of the world has wanted America to take the lead again, and they're rightly encouraged to see the U.S. president stepping up in the ways they hoped he would. It's hard to overstate the significance, for example, of seeing a U.S. president chair a meeting of the United Nations Security Council and making strides on a nuclear deal.

This is not to say Obama was honored simply because he's not Bush. The president really has committed himself to promoting counter-proliferation, reversing policies on torture, embracing a new approach to international engagement, and recommitting the U.S. to the Middle East peace process. But charting a new course for American leadership, breaking with the recent past, no doubt played a role.

UPDATE III: So, when President Obama fails to convince the International Olympic Committee that the Olympic Games should be held in Chicago, that is a reason for celebration, but the President of the United States winning the Nobel Peace Prize is a reason to go trashing both the giver and the recipient? Uhhh..... Excuse me for being cynical, but what does this look like to you?
Posted by zeppo at 6:54 AM