Who cares what the Mayans thought, anyway? Aren’t they dead? 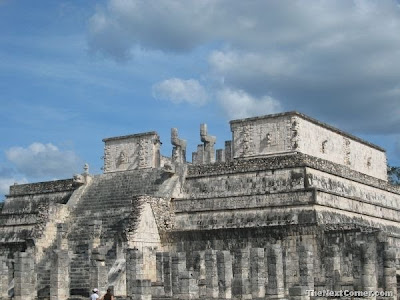 Apparently, some Mayan prophecy predicts the world will end in 2012. There’s a major motion picture about it. There are a lot of homebrewed doomsayers around that have adopted this one, based on the number of hits that a Google search on “Mayan prophecy 2012” yields.

Yeah, so the Mayans were pretty good astronomers. They built some pretty cool stone edifices. I’ve been to Chichen Itza and it is impressive, as ancient ruins go. According to the Mayans own stone carvings, they also had a nasty habit about cutting the beating hearts out of living captives (maybe slaves, maybe vanquished enemies) to offer to their version of the Supreme Being.

I do admit, this whole thing is a windfall at the box office, at least for several weeks, for Columbia Pictures and Centropolis Entertainment. But why, exactly, should we care about what a bloodthirsty, albeit vanished, people thought regarding the end of the world? They couldn’t even see their own imminent demise.
Posted by zeppo at 6:52 AM