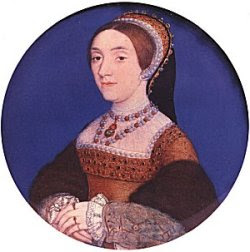 The final season of Showtime’s The Tudors is having a sexy old time with Katheryn Howard, who viewers first saw as a naked nymph on a garden swing. For subsequent appearances she donned clothes, though given the high-school-cheerleader mien adopted by actress Tamzin Merchant, you’d think that a short skirt and tight pep sweater would be more appropriate.

The real Katheryn was young, no doubt about that, and foolish, impulsive, imperious — but probably not as much of a knockout as the series would have us think. Since no absolutely authenticated portrait of Katheryn exists, we have only the words of her contemporaries — one of whom calls her “a young lady of moderate beauty but superlative grace, in stature small and slender.” The portrait shown here is often identified as Katheryn; if so, it looks like she unfortunately inherited the Howard nose.

Not that an oversized sniffer or her moderate beauty were handicaps. By all accounts, she was full of life: dancing, smiling, entrancing all who saw her. We’d call her bubbly today, and that was a large part of her charm. She certainly dazzled Henry, as she’d dazzled men like Henry Mannox and Francis Dereham before him.

She grew up as the daughter of one of the least wealthy of the Howards — her father was Edmund Howard, brother of the third Duke of Norfolk. He seems to have been a bit of a flub, never gaining Henry VIII’s affection or even his trust. His first marriage was to Jocasta Culpepper, and one of their ten children was Katheryn Howard. The impecunious family welcomed the chance for Katheryn to live with her grandmother, the Dowager Duchess, joining young people of her relatively high birth but low economic standing in what amounted to an aristocratic boarding and finishing school. Living in a super-heated (but half-supervised) atmosphere of courtly pubescence, Katheryn must have shared in the declarations of love that preceded sexual dalliance. Our own age might label her emotionally neglected by her family; certainly she and Dereham seem to have made promises to each other that she’d later claim amounted to a pre-contract of marriage. Her grandmother called it something else when she caught wind of the affair, beating Dereham and sending Katheryn to the chaplain for moral correctives.

It was her uncle, the Duke of Norfolk, and Bishop Gardiner who probably brought her to Henry’s attention — not the work of Francis Bryan, as the TV series would have it — as a way of breaking the Anne of Cleves marriage and bringing down Thomas Cromwell. Did Katheryn tell the anti-Cleves faction about her chequered past? Unlikely; though sexually experienced, she was a political innocent and probably saw only what was dangled before her: the chance to be queen of England.

Why did she throw the chance away, first by engaging Dereham as her secretary, then by having an affair with one of Henry’s gentlemen of the bedchamber, Thomas Culpepper? That secret died with her, but in the case of Culpepper — most likely a cousin — it seems to have been an 18-year-old’s love for a young man universally praised for his good looks. Her barely-literate declaration of that love pulses passion across the centuries:

I heartily recommend me unto you, praying you to send me word how that you do. It was showed me that you was sick, the which thing troubled me very much till such time that I hear from you praying you to send me word how that you do, for I never longed so much for a thing as I do to see you and to speak with you, the which I trust shall be shortly now. That which doth comfortly me very much when I think of it, and when I think again that you shall depart from me again it makes my heart die to think what fortune I have that I cannot be always in your company. It my trust is always in you that you will be as you have promised me, and in that hope I trust upon still, praying you that you will come when my Lady Rochford is here for then I shall be best at leisure to be at your commandment, thanking you for that you have promised me to be so good unto that poor fellow my man which is one of the griefs that I do feel to depart from him for then I do know no one that I dare trust to send to you, and therefore I pray you take him to be with you that I may sometime hear from you one thing. I pray you to give me a horse for my man for I had much ado to get one and therefore I pray send me one by him and in so doing I am as I said afor, and thus I take my leave of you, trusting to see you shortly again and I would you was with me now that you might see what pain I take in writing to you.

Yours as long as life endures,
Katheryn.

Then to Culpepper. The Tudors is an intriguing series — not because of what they get wrong, because there’s a lot of that, but because of what they get right. In this case, theirs might be the first historical retelling to include the nasty back story on Thomas Culpepper, so often shown as an innocent young man who unfortunately bites forbidden fruit. Yes, the episode showing Culpepper raping the wife of a park-keeper is accurate; he was convicted of that crime and of the murder of at least one person who came to the woman’s aid. However, he was pardoned by Henry, who sometimes favored such high-spirited young gentlemen. (He did the same for the Earl of Surrey, but don’t get me going about the series’ inaccuracies regarding that scion of English nobility.)

With Culpepper and Katheryn, who seduced whom? Possibly Katheryn was hoping to become pregnant by Culpepper and pass off his baby as the king’s, since Henry’s health and obesity made another heir a long shot — but it’s more likely that once she realized how under the gold-tissue trappings of royalty lay an aging, ailing man, Katheryn became disillusioned and ripe for an emotional connection of her own making.

In any case, though several romances of Katheryn include in her dying words on the scaffold the statement “I die queen of England, but I would rather have been the wife of Thomas Culpepper,” there’s little doubt she felt the sentiment. Ill-educated, hungry for affection and fed on visions of courtly love, Katheryn inspires considerable pity. In the bare-bones picture we have of her inner life, there are hints that she was playing at a game of the courtly ideal, armed with little beyond her youth and energy. It wasn’t enough. Abandoned by Henry, repudiated by the Howards, she had to face death alone. The night before her short life ended, she had an executioner’s block brought to her rooms so she could practice placing her head properly. The image is heartbreaking. Was she hoping, perhaps, that the physical grace she’d relied on for sustenance would be enough to take her into the next world?

(Posted by Philm Phan. For more on Henry's wives, this one about Anne of Cleves, click here.)
Posted by zeppo at 1:08 PM