Obama-bots deployed to force white, heroic Americans to become socialists and have abortions. 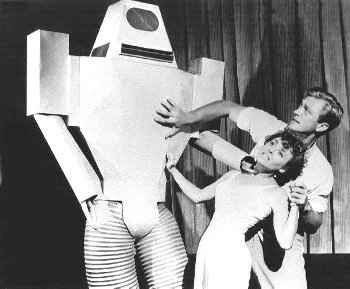 "Come! I shall now murder your unborn baby, even though you are not pregnant."

Obama-bots, or O-bots as they are affectionately called, are indestructable. The product of the nefarious mind of George Soros and the Kenyan-Muslim Jihad and Chowder Society, these automatons were created solely to destroy the God-Fearing United States of America. In its place, a trans-national Muslim caliphate will be created. White people will be forced to bow down to all to scary brown and black people and be forced to sit in the back of the bus. All Christians and Capitalists will be brainwashed, by such entities as the Peace Corp., public schools, and Hollywood blockbusters, so that they won’t wish each other “Merry Christmas” and will demand that the Nanny-State-Government will coddle them when they fall down and get a boo-boo on their knees.

Publicity photo from “Target! Earth”
Posted by zeppo at 10:07 AM