Upon reading an anthology of stories by H.P. Lovecraft, or why I will never, ever own a Kindle. 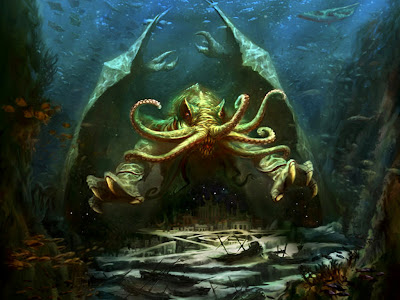 Artistic rendering of Cthulhu, which also sort of represents my feeling towards complex electronic devices in general.

Yes, I recognize the fact that I am somewhat of a technophobe. Anything more complex than a ratcheting socket wrench usually ends up not working for me. Computers do not work. Wireless connections do not work. OK, my cell phone usually works, but that seems to be an exception, probably because it is one of the very low end devices that really does not do anything other than make and receive phone calls and text messages. I will never own a “smart phone.” I absolutely hate crap that doesn't work for me and I have to spend more time figuring out how to make them work correctly than the time I want to use them for.

So, I know that I am already predisposed not to be very enamored of a Kindle or other similar “electronic book” device. But here are some thoughts about why real books – for me, in any case – are vastly superior to a Kindle.

As the title states, I just finished reading an anthology by the great horror writer, H.P. Lovecraft. Click the link if you don’t know who he is. I realize that some younger folks in America might not have a clue as to the influence Howard Phillips Lovecraft had on American horror, and still exerts to this day. Horror writers such as Stephen King freely acknowledge Lovecraft’s influence on their own work. Films such as the Nightmare on Elm Street franchise, many films by John Carpenter such as “The Thing,” probably all of the films by Wes Craven, etc. etc. owe their existence to the work of Lovecraft.

That doesn’t do a lot to explain my love of real books over a Kindle, other than to set the stage. I picked up my Lovecraft anthology in a used bookstore (absolutely the best kind of bookstore) for seven bucks a few weeks ago. This particular one was printed in 1945. The cover is in pretty good shape for something that old, although the top of the spine is pretty frayed looking and the corners are rather smashed with the cardboard sticking through the cloth covering. The pages are all very yellow, especially around the edges, as are many books that were printed during the war years of the 1940’s when they used much cheaper paper with a higher acid content than normal. There are water stains on the edges and the book has this very “old book-ish” smell to it. In other words, it is an absolutely perfect vehicle from which to read a little Lovecraft. In case I have whetted your interest, you might go looking for a version of “The Colour Out of Space.” That might be the most frightening short story I have ever read. I remember reading it when I was in jr. high school, probably at 11 o’clock at night. It made quite an impact. “The Cult of Cthulhu” is also a very good read, and is probably his most famous story. I just could not envision reading something like that from an electronic reader, where you are just scrolling up and down an LED powered screen. Where are the browning pages? Where is that interesting smell? An e-book would just not have worked for me.

I just like books as the means to deliver the words to the reader. Books have a substance to them that a Kindle could never have. Books, especially older books that have been read many times, develop a character all their own. They become unlike the next book you pick up off the shelf. I even love paperback books. I enjoy flipping back and forth between pages when I am taking a break from actual reading, which I do rather often. I go back and look at the cover art. My, isn’t that an interesting piece of artwork? I contemplate the creases in the spine and the missing chips from the cover. The more dog-eared the copy, the better. One book that I have that I re-read about every other year is “The Magus” by John Fowles. I won’t go into a literary discussion of that particular novel at this time. Many people don’t like it; as it sometimes seems to be an exercise in the worst excesses of that particular writing style, “Let’s try to confuse the hell out of the reader.” But I somehow find it fascinating. It just has a very unique, mysterious air to it, even when I know what is coming. My original copy of that book split into two pieces because of multiple readings and admittedly less than careful handling. I put lots of Elmer’s glue on the outside of the spine and then several layers of Scotch tape. That worked fine and it gives a very unique feeling to the book. I know exactly which book from my collection I am holding when I have that in my hand.

Yes, I am somewhat of a collector of old books, which also no doubt colors my perception of a Kindle. I have a number of very interesting editions, such as a what appears to be a first edition from 1901 of “Mr. Munchausen,” from spawned several films over the years, including Terry Gilliam’s “The Adventures of Baron Munchausen,” and a 1894 first edition of “Trilby,” which gave us the evil manipulator, Svengali, and popularized the notion of “animal magnetism,” also known as hypnotism. I could go on, as I have quite a number of interesting volumes in my collection. I just don’t see the attraction of reading any of those books on a Kindle device. Any book that I would read purely for enjoyment, I really want that book. I may get rid of it later, but I want to hold that copy in my hand while I am reading it. Being able to download it from Amazon for a couple of bucks instantaneously holds no attraction for me.

Now, this is not to say that I think that the Kindle should not exist. I have heard a number of stories about how someone’s mother has started reading again, mostly because of the ease of use and the fact that you can make the font really big for someone who would otherwise have to strain to read smaller print. Great. Maybe it would be good for a collection of technical books as well, although I still like being able to flip back and forth between pages, where you can easily see where you are in the volume, rather than try to scroll around or jump around between pages. I have enough of that with these technical documents I have to read on the computer for my job. And I can see where a search function would come in really handy from time to time. But I grew up with books. My mom had lots of books lying around. She read to me from some very old copies of “Winnie the Pooh.” I avidly read all the Hardy Boy books when I was a kid. I have always had a large collection of books that has followed me to place to place as I moved around during my life. When I remodeled my house, I specifically included a largish library/computer room with two walls covered with built-in bookshelves, which were filled immediately when I unloaded all the boxes that contained my books.

Carrying around an electronic tablet thingy that probably wouldn’t work the way I wanted it to and the battery would run out when I needed it and didn’t have the recharger just wouldn’t cut it for me.
Posted by zeppo at 10:20 AM