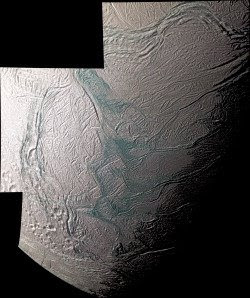 The picture and following text are from the Oct. 20th issue of Aviation Week and Space Technology. Sorry, no link, as it is a subscriber-only web site.

NASA/ESA Cassini spacecraft imaged Saturn’s moon Enceladus from only 26,000 mi. as Cassini climbed away after passing within only 15 mi. of Enceladus’s surface Oct. 9. The daring dive was made to sample the geysers of water and other contents that explode from fissures in the surface such as the giant canyon that cuts across half of the 330-mi.-dia. Enceladus. The resolution of this raw unprocessed image is 1,650 ft. per pixel. A second dive is planned Oct. 31. Enceladus is one of several areas around Jupiter, Saturn and Mars where the search for water is intensifying in relation to the search for alien life (see p. 56). NASA/JPL/SSI image.

The Enceladus flyby down to 15 mi. is enabling the Cassini fields and particles teams to start indentifying specific constituents, like more complex carbons, that had not been seen in the plumes before an August approach down to 31 mi., says Cassini project scientist Bob Pappalardo. During the earlier flyby, the dust analyzer instrument could tell that the plumes form a fist-shaped structure at higher altitude above Enceladus. But this time, flying much lower, the instruments could detect “individual finger-shaped plumes” making up the jets as Cassini zoomed through at 40,000 mph., Pappalardo told Aviation Week & Space Technology.

Cassini scientists are elated, Pappalardo says, because this new information could help build evidence that Enceladus may harbor a subsurface ocean, warm enough to host a stew of living organisms a billion miles from Earth.

These are just absolutely astounding photos. I just can’t find any appropriate words about how amazing I find our ability to explore our solar system. Just think, for a moment, about how many brilliant minds have contemplated might what actually be out there and what it might look like. And now, we are finding out!
Posted by zeppo at 6:44 PM