Is the Earth’s magnetic field getting ready to flip polarities? 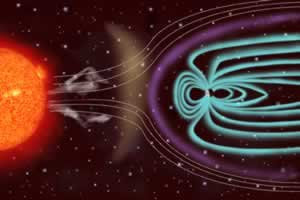 There is some very interesting and somewhat alarming data being collected on the Earth’s magnetic field. Here are a couple of items that fit into that category. The Earth’s magnetic field is about 10% weaker now than it was 150 years ago. That’s pretty staggering. 150 years in geologic time represents a blink of the eye, and 10% of anything is a pretty significant percentage, especially something as powerful as the planetary magnetic field. That change represents a huge amount of energy. The other interesting data point is that there is a very weak spot in the magnetic field over the southern Atlantic off the coast of Brazil where the local magnetic field about 30% of the normal strength of rest of the field.

I have discussed the importance of the Earth’s magnetic field before, in the context of how crucial it was for the formation of life on Earth. It protects the Earth’s atmosphere, oceans and all the life on the surface of the planet from the solar wind. The term “solar wind” is a pretty benign sounding, given how much havoc it can wreak on anything left unprotected. The solar wind consists of massive amounts of highly energized particles streaming off the sun’s corona. Normally, the Earth’s magnetic field funnels all these particles into the polar regions, which results in spectacular displays called the Northern Lights. A planetary atmospheric system left unprotected from the solar wind for millions of years would result in the atmosphere blasted off the surface of the planet and into space. The oceans would eventually evaporate. The result would be a dead, barren planet like Mars. In fact, that is exactly the scenario being discussed among planetary scientists to explain why Mars obviously once had large amounts of water flowing on the surface. Evidence is showing that Mars may once have had a magnetic field protecting it, but it does not now.

If Earth’s magnetic field continues to decay, it could suffer the same fate as Mars. Put on a liner scale, given the present rate of decay, the entire magnetic field could be gone within 1500 years. Global warming and widespread climate change would be a minor annoyance compared to this apocalyptic scenario. Global climate change might be catastrophic to mankind, but many of the current species on Earth would adapt and survive. The Earth, as a living entity, would survive in some form. However, the loss of the protective magnetic shield and the subsequent loss of the atmosphere and oceans would result in a dead planet.

Thankfully, many scientists are predicting that this doomsday scenario is unlikely. Fluctuations of the magnetic field appear to be the norm. Another scenario is that the Earth’s magnetic poles are getting ready to flip. That is, what used to be the “+” magnetic pole on the northern axis of the globe, after some rather wild fluctuations, will end up at the south pole. This has happened many times in the past, and will undoubtedly happen again in the future. The instability of the field before this occurs could lead to loss of radio and satellite communications, the possibility of intermittent failures of power grids, etc. for possibly years. However, compared with the possibility of the slow death of the entire planet, these effects should be considered relatively minor.