I see Rush Limbaugh is STILL a big fat idiot. 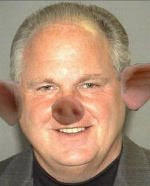 Rush Limbaugh would rather have President Obama fail than have something good happen to the country, all in the name of ideology. That’s the only thing that matters to him, whether “his side” wins or loses. From HuffPo.

Saying he was "suspicious" of Obama, Limbaugh said the facial expressions of Obama supporters were "frightening" and slammed Republicans who've expressed hope that Obama succeeds:

"They're drinking the Kool-Aid... they're afraid of being called racists."

Limbaugh claims that Obama's race doesn't matter to him now that he's president, oddly comparing Obama's being black to being a Martian:

Several things about Rush’s statements, besides the really, really strange Martian analogy… So, when have the Republicans ever been afraid of being called anything by Democrats? They have acted without a conscience for the better part of 8 years, they are going to be worried about being called names now? If Republicans were really worried about being called racists, then they probably should have done a better job after Hurricane Katrina. But the bigger issue here is that there are a huge amount of people out there in this country that are suffering real hardships. People are losing the jobs by the tens of thousands. Housing foreclosures are up all over the country. Food banks are seeing longer and longer lines while receiving less and less in the way of contributions. Families are still having their sons, daughters, husbands and wives come home from Iraq with traumatic injuries, if they are coming home alive at all, for absolutely no reason as far as I can see. And Rush wants Obama to fail for the next four years, so the Republicans can “win” future elections and (I suppose) do what they have been doing for the last eight years, which is to be total screwups all in the name of ideology.

Rush Limbaugh is a prick.

Photo from guntotingliberal.
Posted by zeppo at 8:05 AM