My thoughts about today’s inauguration of President Barack Obama. 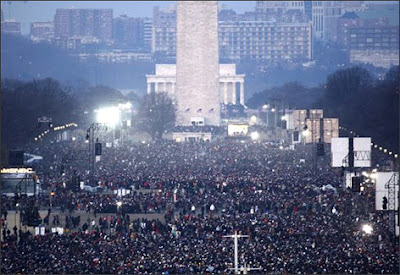 Every blogger in the country must have a similar post up by now. I am certainly not going to add anything new or insightful. But this joyous and historic occasion really calls out for a post.

What I am thinking and feeling is no different than 75 to 80 percent of the rest of the country. I am extremely proud that this country has made one significant step beyond the overt racism that has dominated the cultural landscape since the country’s inception. Electing an African-American man to the highest office in the land is something truly amazing. I am old enough to remember the assassination of John and Bobby Kennedy and Dr. Martin Luther King. I can remember, although comprehension on my part was not really there, the race riots, the civil rights movement. I also had a closer look, as my family (my protestations notwithstanding) moved to Alabama in 1970 when I was a freshman in high school. Rural Alabama... Extremely rural Alabama... My step-father, who was responsible for this abrupt move, bought a drive in restaurant that had walk up order windows. The one in front was prominently labeled “Whites Only.” The one around the side of the building was labeled “Blacks Only.” And what’s more, this was no anachronism, no holder from some bygone time. These were “here and now” signs of the time that were expected to be obeyed. The high school close to mine went through some upheavals when adults found out that some of the white cheerleaders were dating a couple of black kids on the basketball team. I don’t really know what happened, but it was made VERY clear to the girls that, under no circumstances, they were going to go to the prom with the black kids. This town was on the Alabama/Mississippi border, and was only about 70 miles from Philadelphia, Mississippi. I don’t think I need remind people what happened there. In 1970, I was only 6 years removed from those horrible events.

I saw, for myself, the hatred and distrust from very hardened individuals. My step-father turned out to be a drunk, ignorant, racist bastard. To my everlasting shame, I even bought into some of the hateful rhetoric of the time. I remember once, probably just after I had moved there, the white kids in my school asking me if I was “a nigger lover.” I rapidly and strongly disagreed, as I was conscious of which way the river was flowing and I wanted to “fit in.” I don’t remember ever feeling any dislike or animosity toward any of the black kids. I think some of them treated me more fairly than did the white redneck kids. I think I just didn’t know how to relate to them and had no idea what to say.

So, given my rather peculiar personal history, I can truly say how proud I am that Barack Obama is taking the Oath of Office today. In many ways, this country has come a very long way. Many parts of the country, however, still remain mired in the 1930’s. But there is progress. I can’t tell how many times I have choked up a little or gotten teary eyed when I see a picture or video of black people, young and old, cheering or overtly crying from sheer joy. I cannot imagine what these people must be feeling now. Maybe they are thinking that this country isn’t quite as bad as they thought and that maybe the deck isn’t so stacked against them that they can’t overcome the barriers that still exist. The celebration in Chicago during and after Obama’s Election Day victory still is one of the highlights in my memory.

But what is even more significant than the fact of the first African American president is the fact that his race, although vitally important, is not the biggest amazement to me. Barack Obama was not elected because of his race, nor was he elected in spite of his race. He was elected because he represents the best hope at this time when the nation is facing about five severe crises simultaneously. He truly wants to bring people together and work with people on all sides of politics. He is one of the first politicians I remember who really seems to believe that scoring political points off your opponent is nowhere near as important as actually solving the problems of this country. People are tired of the Bush years, and yes, of the Clinton years before that. The country, as a whole, wants to move beyond all that and really get problems worked. Couple this with the fact of his race and that’s where all the joy, hope and pride come from.

This really is an amazing thing to see. I truly hope that President Obama can follow through on his promises and inclinations, and that this country gets behind the hard solutions that will be proposed for very tough problems. I sincerely hope that the bad old days of playing political games to try to ensure a “permanent majority” for either party is over and that politicians will just shut the hell up and work together for once.
Posted by zeppo at 6:45 AM

Labels: good news for a change