Could the future transportation needs of the U.S. be met with trains? 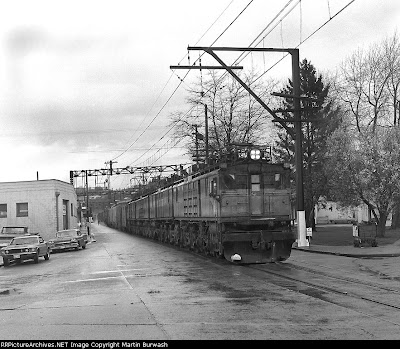 I just finished reading a really informative feature story on the Washington Monthly blog. It covers a lot of ground, but it is mostly advocating a radical increase in spending on railroad infrastructure. Transporting freight by rail is much more efficient than by a fleet of trucks. It has the additional benefit of being also much safer, as it takes a significant amount of truck traffic off our already congested and sometimes unsafe highway system.

The significant downside of increasing the use of rail traffic for our transportation needs is that the current system is pretty maxed out right now, and railroad infrastructure is very costly.

However, when all aspects are considered, it would appear that the United States ought to at least consider a large-scale jump in our railroad capacity. Expecting the railroads themselves to fund this expansion is not terribly realistic, although many are already laying new tracks with their own funds.

The feature in the Washington Monthly discussed one very interesting point that I had not really considered before. That is, what would power this next generation rail system? Diesel locomotives, although they are getting better all the time, are still based on internal combustion engines that consume petroleum products and emit pollutants. Because all industries should be considering how to “go green” in the 21st century where energy is going to become more and more precious, the railroad industry should stop and think a bit about this. The proposal laid out is to use wind power, especially in the central plain states, to power electric locomotives. Windfarms could be built alongside the tracks, which would have a couple of positive benefits. First, the transmission lines would not need to be very long. Electrical grids lose quite a lot power just by energizing the system. These losses can be rather substantial if the grid is not well maintained. The other benefit is that the trains themselves could just bring all the materials for windfarms and dump them by the side of the tracks. Modern windmills are very high-tech and rather massive. By having the windfarms set up shop in very close vicinity to railroad tracks, transporting the windmill components becomes less challenging than by trucking in large components to out-of-the-way locations.

Electric locomotives are not widely used in the U.S., except for the Northeast corridor (Boston, New York, D.C.) and other metro areas. However, at one time, electrified rail lines, such as the one shown in the picture above, were commonplace. They are able to generate a significantly larger percentage of pulling power over diesel-powered locomotives, since diesels must carry large reciprocating engines, electrical power generators and diesel fuel. Electrically powered locomotives pull power directly from the grid above and send it directly to the electric motors that drive the wheels. They also have one other added benefit. Train locomotives use a braking technique to slow down called dynamic braking. The electric motors that usually drive the wheels are used instead as brakes, which generate electric power. In diesel locomotives, this generated electricity just goes into big radiators and is lost as heat. With an electrified rail line, however, this electrical power can be put back into the electrical lines above for use by another train.

Here in Washington state, electric locomotives made quite a bit of sense. Both the Great Northern Railroad and The Milwaukee Road made heavy use of electric locomotives in the early and mid-20th Century. Hydroelectric power was cheap and plentiful. There was also the presence of an imposing tunnel through the Cascade Mountains at Stevens Pass. The Great Northern Railroad suffered a potentially catastrophic accident when one of its trains powered by a coal burning steam locomotive got caught in the tunnel. The crew and all the passengers could have easily asphyxiated. Luckily, the train was able to back out of the tunnel. This event caused Great Northern management to reconsider this approach. The Great Northern ended up installing an electrified rail line from Skykomish, on the western slopes of the Cascades, to Wenatchee, near the Columbia River in eastern Washington. The dam built by the Great Northern across the Wenatchee River up from Leavenworth, Washington, that was used to house the electrical generators that powered this section of GN track still remains today.

Electrically driven railroad locomotives are not some vast leap in technology. It is technology that was in use from the 1930’s, and is still in use to today. The building of such a transportation infrastructure would be costly, but it would generate a not insignificant number of new jobs and well as address the country’s growing transportation needs. I would hope that there are some forward looking people in this country would might consider this proposal as something more than just a pipedream. Given the looming shortages in fossil fuels and the need to develop more “green” industries, the U.S. could do a lot worse than spend some resources in this area.

(The picture above is of the Milwaukee Road electrified rail line through the town of Renton, Washington. The picture is from 1971, and comes from the website, rrpicturearchives.net. This is from the collection of Martin Burwash. I hope that he won’t mind me using the picture, as I am providing a link. For train enthusiasts, this is a very cool web site and includes a great deal of historical railroad photos.)
Posted by zeppo at 12:11 PM