According to someone who looks like he should know, we were about four hours away from losing our entire economic system here in the U.S. 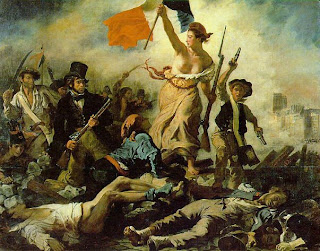 I really hate the phrase “the end of **** as we know it”, and the person speaking is being perfectly honest. That phrase is fine when I hear it in a 1950’s era sci-fi film, like Them! For things in the here-and-now reality, no, I don’t like to hear that. It really gave me the heebie-jeebies, whatever those are, when I first heard a clip of this on Countdown. Here is a text version that I came across below was in a much bigger column in Sadly, No! (You should go read this post at SN. It’s hysterical and deeply, deeply depressing at the same time.)

“I was there when the secretary and the chairman of the Federal Reserve came those days and talked to members of Congress about what was going on… Here’s the facts. We don’t even talk about these things.

“On Thursday [September 18], at about 11 o’clock in the morning, the Federal Reserve noticed a tremendous drawdown of money market accounts in the United States to a tune of $550 billion being drawn out in a matter of an hour or two. The Treasury opened its window to help. They pumped a hundred and five billion dollars into the system and quickly realized that they could not stem the tide. We were having an electronic run on the banks. They decided to close the operation, close down the money accounts, and announce a guarantee of $250,000 per account so there wouldn’t be further panic and there. And that’s what actually happened. If they had not done that their estimation was that by two o’clock that afternoon, five-and-a-half trillion dollars would have been drawn out of the money market system of the United States, would have collapsed the entire economy of the United States, and within 24 hours the world economy would have collapsed.”

“It would have been the end of our political system and our economic systems as we know it.”

O.K., I would normally dismiss people who go around saying things like, “It would have been the end of our political system and our economic systems as we know it”, as someone just going all over-the-top and hyperbolic in order to inflame whoever it is he is trying to inflame. Rush Limbaugh comes to mind. Or maybe he might be just an insane gasbag, such as James Inhofe (R-OK). In this case, however, I am pretty much inclined to believe what this guy is saying.

If this statement above is anywhere near the truth, then I have a severe case of sweaty palms. We are actually talking about how close we came to “the end of our political system as we know it.” That is a very scary thing to contemplate. Oh sure, there are quite a few Republicans that we could certainly do without, and I am certainly weary of the constant political games being played as if politics were some sort of game of Cricket in coats and ties. But about the only thing that could end our political system at this time is complete anarchy, which a complete collapse of our financial system could certainly precipitate. Anarchy is not a pretty thing to contemplate.

Painting of French Revolution from here.
Posted by zeppo at 5:22 PM