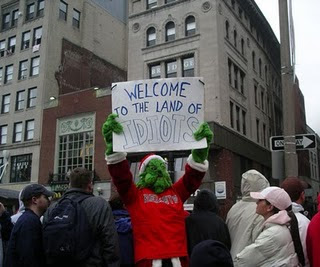 I suppose I learned the lesson that Stupid is now not just acceptable. Being Stupid does not disqualify you from anything. In fact, in many cases, being Stupid is very helpful. It endears you to “common folk.” It shows that you are one of them. It reinforces their Stupid beliefs when they hear someone famous espousing the same Stupid things that they also believe in. Being Stupid can elevate an unemployed plumber to celebrity status. Being Stupid can make common folk believe you are doing something great when you quit your position as an elected official and somehow try to turn that into a selfless and noble act. Being Stupid can get you a program on a major cable “news” outlet where you can say whatever Stupid thing that pops into your mind and the audience eats it up. Being Stupid seems to actually be a requirement to become an elected official from the state of Oklahoma. Being Stupid results in joy when the U.S. loses a bid for hosting an Olympic Games and anger and resentment when the President of the United States wins the Nobel Peace Prize.

Being Stupid is no longer a cause for shame. Being Stupid is something to be cultivated and celebrated. When you say something Stupid, or even Really Stupid, you are no longer required to remove yourself from the public limelight for a suitable period of time. No, the correct response to being caught saying something Stupid or Really Stupid is to either pretend you never said it, even when your Really Stupid remark is one of the most highly viewed You Tube videos of the week, or become offended that the liberal elite media took your statement out of context or is so liberal and elite that they are obviously out of step with the rest of Stupid America.

Stupid is now so routine that most Stupid things rarely even get noted anymore, other than at some of the liberal blogs, who are obviously loser teenagers in pajamas who work from their parent’s basement. Being Stupid didn’t disqualify George W. Bush from being President of the United States, although most people in the country probably didn’t realize how incredibly Fu*king Stupid he actually is. However, we may be reaching the point that being Stupid may be the thing that gets someone like Sarah Palin elected President.

STuPid. Get yours today!
Posted by zeppo at 8:26 AM