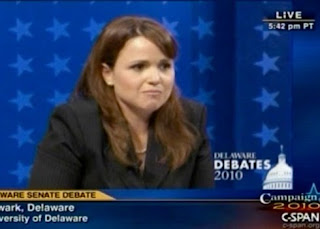 Her problem is that she scored big for the opposing team. This has gotten much coverage in the blogs this morning. This comes from Washington Monthly.

She complained that Obama and Democratic nominee Chris Coons are advocating something dangerous by proposing a drawdown of troops begin next summer.

"A random withdrawal, that he has said he supports, will simply embolden the terrorists to come after us even more, saying, 'I've chased away the superpower,'" O'Donnell said during a nationally televised debate hosted by CNN at the University of Delaware.
…

But this description of recent history is just astounding: "Well if you remember when we were fighting the Soviets over there in Afghanistan in the '80s and '90s, we did not finish the job, so now we have a responsibility to finish the job and if you are gonna make these politically correct statements that it's costing us too much money, you are threatening the security of our homeland."

Um…. What? Well, I suppose one could say “we were fighting the Soviets” if you are talking about a proxy war kind of thing, because “we”, meaning the U.S., never fought in Afghanistan until after 9/11, when the Soviet Union was long gone. Sure, we supplied weapons to the “freedom fighters” of that time. Remember: freedom fighters of today are tomorrow’s terrorists. Anyway, that’s a weirdly worded statement. Plus, “the terrorists” are now in flippin’ Pakistan, Christine! You doofus.

What in the world did Christine O’Donnell see in herself that made her run for U.S. Senator? This woman in a buffoon. Not that we don’t have lots of buffoons in this country, both male and female. But you would think that anyone with any sort of sense of self awareness would realize when they are in over their head. That doesn’t seem to be true of today’s Republican Party. Buffoonery seems to be the order of the day.

I know all about the “anti-elite, anti-establishment” feelings that have been carefully cultivated by the Republicans over the last 40 years or so. But have we really gotten to a place where a large percentage of American citizens really think elected people with absolutely no qualifications to run this country is a good idea?

What kind of choice is this? What do you expect is going to happen?
Posted by zeppo at 6:59 AM