"Hip" phrases used by football announcers that I wish would go away. 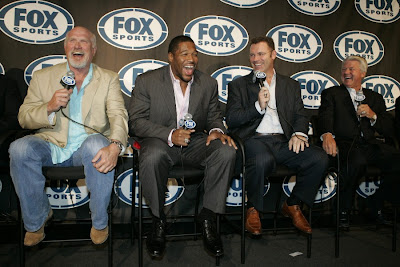 "Pick Six" - When anyone intercepts a pass and runs it back for a touchdown, or even has the opportunity to but doesn't, it must be referred to as "pick six." It cannot be said that it was an interception for a touchdown. It is absolutely mandatory to call it "pick six." That was maybe cute for a while, but it is wearing thin. It's not even true alliteration.

"In Space" - This phrase apparently refers to the 97% of the football field that isn't inhabited by most of the players. When I first heard one of the announcers refer to a defensive player as someone "who can make great tackles in space," I was thinking, "Wow. That guy must be REALLY good. But how to you practice tackling somone in space?" I'm a very literal guy...

"Guys...?" - This is for the female sideline analysts and announcers back in the studio. When they want to turn it back to the announcers doing the game, they say "Guys...?" in the interrogative. Like, "Guys, will you now come in a rescue me from that really stupid observation that I just made that almost anyone watching the game could have concluded by themselves and makes it questionable as to why I am getting paid to do this?" Watch for this one. Once you notice it, it's almost impossible to not hear it every single time. 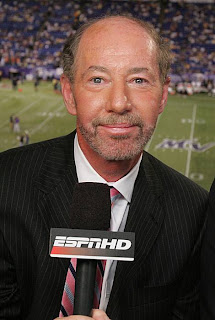 "Dial up" - Defensive coaches "dial up" their calls, like blitzes and different coverages. They can't just "call plays." No, they must "dial up" a blitz. Jeez, not only does the use of a "hip" term sound silly after continual usage, that is just SOOO 1990's. Dial up web access is an anachronism, a thing of the past. I don't even have dial up access anymore. Maybe they should say that the defensive coordinator has a App for that. Need a blitz? He has an App for that.

I suppose the thing I detest about sports announcers in general, and this really applies to the pre-game "analysts", is that they either feel they must, or have been directed to by their superiors, act like 22 to 25 year olds out at a bar after three rounds of drinks. Loud, rather obnoxious, constantly interrupting each other, every single thing that comes out of their mouths is said with absolute certainty at a very loud volume... This is particularly unattractive behavior when all the men in question are in the late 40's and beyond. I suppose they are trying to connect with their intended audience, which is mostly 22 to 25 year old males full of testosterone and brimming with self-confidence. But it sure wears thin. I don't bother watching anything on television that isn't the game itself, and those are becoming limited.
Posted by zeppo at 8:18 AM