What was that about the “liberal media” again?

Media Matters for America did a rather comprehensive study about the columnists carried by the nation’s newspapers. Here is what they found.

· The top 10 columnists as ranked by the number of papers in which they are carried include five conservatives, two centrists, and only three progressives.

· The top 10 columnists as ranked by the total circulation of the papers in which they are published also include five conservatives, two centrists, and only three progressives.

This is more of that “common knowledge”, opinion driven fact-less facts that I was railing against earlier. Everyone “knows” that the media is has a “liberal bias”. No one wants to really find out the truth, however, as it would interfere with the things they already know.

Here are some other observations I have about the media and its biases.

· Of all the cable news programs and hosts, only one, count them, ONE, can be considered to be liberal. That is Countdown on MSNBC with Keith Olbermann. Everything else on cable is primarily or exclusively conservative. Fox News in totality, not just their hosts like Bill O’Rielly and Sean Hannity, but also their anchors such as Brit Hume, Glenn Beck on CNN, the list goes on.

· Newspapers thought of as ultraliberal such as The New York Times and Washington Post are nothing of the kind. The New York Times, courtesy of Judy Miller and her publishers, became a leading advocate of war with Iraq when the White House would feed the Times selective information, it would be printed in the Times as fact, and then the administration would use that story to back up their own position. The Washington Post editorial board was very much pro-war prior to the invasion. Their ombudsman gets very testy when liberals point out the errors and inconsistencies of the stories in the paper, but become very apologetic when conservatives make criticisms.

· ABC is owned by the Disney corporation. Disney is not known for its liberal leanings. ABC was responsible for airing a very misleading “documentary” entitled “The Path to 9/11”, which attempted to blame the Clinton administration for not preventing the attacks of 9/11. CBS, along with Viacom, is part of the Sumner Redstone National Amusements empire. CBS terminated the contract of retired Army Major Gen. John Batiste, consultant to CBS News, after he appeared in a political ad for VoteVets.org critical of President Bush and the war in Iraq. Yes, CBS did employ Dan Rather who was not a fan of George Bush and went overboard on a story regarding Bush’s non-service during Vietnam. However, please note that he is no longer employed by CBS. NBC is part of the GE empire. The employment of Keith Olbermann aside, huge corporations are not normally liberal. Big business is the domain of the Republicans.

· Several newspaper columnists have been caught giving pro-Bush administration stories while getting paid for them. This is not objective journalism, this is shilling for money. That is extremely unethical behavior not to tell your readership that this isn’t an unbiased opinion instead of a paid political announcement.

· The Sunday talk shows on the major networks lean very much toward Republican and conservative guests. Statistics show that the trend seems to be running about 60% Republicans to 40% Democrats. In many instances, some of these shows (such as Meet The Press on NBC) have exclusively conservative Republican guests. There is no attempt to get an even-handed debate going with participants from both sides of an issue. Those Democrats that do get invited on are usually Joe Biden (not the most steady of liberals) and Joe Lieberman, who is now officially an independent but bashes the Democrats and praises the Republicans much more often than the other way around. And then there is that little matter of Tim Russert on Meet The Press, who never challenges his guests when they make controversial statements, and who (according to testimony during the Scooter Libby trial) always assumes, when talking to a politician, that the conversation is off the record and must get permission to use the information, rather than the other way around like reporters are supposed to do. Plus, on the many shows which he was on that dealt with the Scooter Libby trial, he never mentioned his role in the entire mess, as if that were nothing consequential. And there is also the little item where one of the staffers from Dick Cheney’s office stated, during that same trial, that they liked the Vice President “use” Meet The Press to “get the story out”. This does not sound like a liberal network to me.

· Local papers tend to get their national stories from national sources. Often, those national stories are just repeated without any attempt at analysis or fact checking. Local television markets are even worse. For years, one television station in my market constantly referred to the Iraq war as “The War Against Terror”, when it was not at all conclusive that there was any relationship at all between Iraq and any terror plot anywhere in the entire world.

There’s more. There always is. But you get the drift. By hammering away on the concept of a “liberal media bias” for decades, conservatives have totally reversed the situation such that it is now exactly opposite of the original complaint, which may or may not have ever truly existed. Due to the constant barrage of complaints and in an effort to appease the complainers, the national media has now become predominately conservative. But no one acknowledges that. “Common knowledge” still has it that our national media is liberal.

If that is true, I wonder why liberals, especially in the lefty blogs, rake the national media over the coals when they see the job of an independent press being ripped to shreds. That certainly doesn’t sound like a liberal press to me. What conservatives are REALLY complaining about, in my mind, is that the national media does not always mindlessly parrot the Republican talking points and actually does push back on the propaganda being fed to them at times. That is really what is ticking off the conservatives. It isn’t that the press is liberal, is that it isn’t a compliant tool to be used by the Republican party for any purpose that they please.

But I have also found that there is no arguing with “common knowledge”. Facts be damned, reality is what one wants to make of it, apparently. 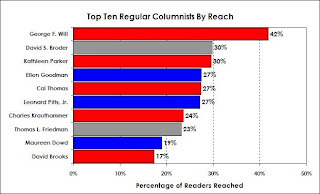 Here's the chart from the Media Matters study. You should be able to figure out the red and blue color coding. Gray is a "centerist". I would probably take issue with David Broder being called a centerist and Maureen Dowd as a progressive. She takes pot shots at Dems quite often, John Edwards' haircut being just one example.
Posted by zeppo at 5:59 PM