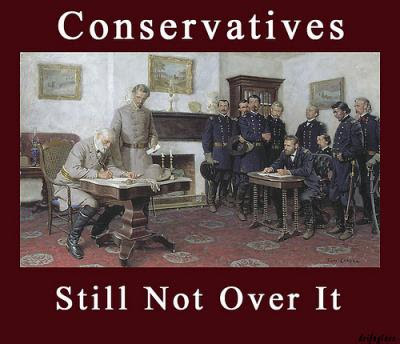 Via John Cole at Balloon juice.

Gov. Bob McDonnell® has quietly declared April 2010 Confederate History Month, bringing back a designation in Virginia that his two Democratic predecessors—Mark Warner and Tim Kaine—refused to do.

Republican governors George Allen and Jim Gilmore issued similar proclamations. But in 2002, Warner broke with their action, calling such proclamations, a “lightning rod” that does not help bridge divisions between whites and blacks in Virginia.

This year’s proclamation was requested by the Sons of Confederate Veterans. A representative of the group said the group has known since it interviewed McDonnell when he was running for attorney general in 2005 that he was likely to respond differently than Warner or Kaine.

“We’ve known for quite some time we had a good opportunity should he ascend the governorship,” Brandon Dorsey said. “We basically decided to bide our time and wait until we had more favorable politicians in Richmond.”

To which John replies:

If someone can explain to me why it is so important for people on the losing end of a war they fought to perpetuate an evil institution like slavery to be “recognized,” I would really love it. Why would anyone willingly be associated with that?

Totally agree. I sometimes wonder what would be the response, other than insane laughter, if one of those original CSA states would actually pass some sort of resolution to secede from the United States. This absolutely kills me. These are the people who call other people traitors and accuse everyone of “blaming America first” when anyone offers any sort of criticism toward the U.S. government (current or past). But boy, something happens that THEY don’t like, “Goddam it! We won’t stand for this! Let’s secede from the U.S.!”


UPDATE: Lawyers, Guns and Money (We are aware of all internet traditions) has a good rejoinder to Gov. McDonnell.

Well, sheeeeeeeeeeyit. It’s Treason-in-Defense-of-Slavery Heritage Month again, so I suppose we need to remind people like Virginia Gov. Bob McDonnell what the “shared history” of Virginia’s Confederate heroes actually entailed. Here’s a choice excerpt from a speech given at Virginia’s February 1861 secession convention by the South Carolinian John Preston, one of the Confederacy’s great apostles of disunion:

You may, as you are at this moment doing, centralize a coercive power at Washington stronger than the Praetorian bands when the Roman eagles shadowed the earth “from Lusitania to the Caucasus,” but you cannot come nearer coalescing the people of Virginia and the people of Vermont, the people of the St Lawrence and the people of the Gulf, than did Rome to make one of the Gaul and the Dacian, the Briton and the Ionian. No community of origin, no community of language, law or religion, can amalgamate a people whose severance is proclaimed by the rigid requisitions of material necessity. Nature forbids African slavery at the North. Southern civilization cannot exist without African slavery. None but an equal race can labor at the South. Destroy involuntary labor and Anglo Saxon civilization must be remitted to the latitudes whence it sprung.

Um..... Ouch? That would seem to put to rest what the Great State of Virginia (or was it a Commonwealth?) thought of the reason behind seceding from the United States of America.

UPDATE II: Crooks and Liars had a good one.

"A modest proposal: no one displaying the Confederate flag gets to lecture any American about patriotism - ever."