News Of The Future: Robots Win Right To Keep and Bear Arms. 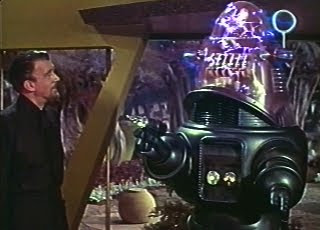 The Supreme Court, in a landmark decision, found in favor of the plaintiff, The National Rifle and Particle Beam Destructor Association (NRPRDA), that robots should be considered to be citizens if they were built in the United States of America and therefore should be allowed to possess and carry firearms. The NRPRDA released a statement hailing the decision as "a victory for all Americans, whether they are mechanical, carbon-based or multi-national corporations." Opponents of the ruling predicted an increase in firearm and particle beam destructor deaths, due to the fact that a majority of the mechanical persons designed and built today run Windows 2030 Excelsior! (TM), which some software designers stated has a tendency to randomly jump between applications. Ex-half-term President Sarah Palin and current spokesperson for Clairol Hair Products, stated that she "was thrilled, you betcha, because Russia has millions of robots just waiting to march into Alaska."
Posted by zeppo at 8:21 AM