I am almost as despondent about the response to the shooting of Gabrielle Giffords as I was the shooting itself.

I was correct that no one would ever consider that some of the imagery and inflammatory language may not be appropriate. Nope. The overwhelming response of the right has been very predictable. It’s not their fault. Those weren’t gun sights. How dare liberals use this incident to try to score political points. We should all be ashamed of ourselves for even thinking such a thing. Bill O’Reilly is terribly angry, and we all know he has never been angry at anything before, ever, at the New York Times and we should all condemn them.

It is all so predictable. And insane, too, of course. I would have never thought that people could be so stubborn, so insistent that their “side” is always right and the other side is always evil, and that all narratives absolutely must be adjusted accordingly, no matter the situation or the cost to American citizens and the country as a whole. The narrative must be preserved!

Here are some of my thoughts about some of the bigger narratives that have emerged in the last couple of days.

Narrative 1: The shooter is obviously mentally unstable. The use of sometimes violent rhetoric and imagery by the conservatives and right wing pundits of this country had no impact on this guy. He would have done what he did anyway.

My response: That is quite possibly true. We don’t know for certain. But given the political climate of this country right now and the real and threatened violence (see my previous post) that is coming from the right these days, don’t you think that it might be prudent to tone it down, even though there is may be no direct evidence that the shooter was motivated by political hate speech? Wouldn’t that be a wise thing to do?

Narrative 2: Both sides have a problem with out of control political hate speech.

My response: Nope. No they don’t. This is almost purely a right wing problem. See my previous post.

My response: What a horseshit strawman that is. No one is saying that anything about censorship. We are calling for self-restraint. Those are two very different things. Morons.

Narrative 4: This country doesn’t need more gun control laws. We actually need less. If more people in that crowd had been armed, this tragedy wouldn’t have happened.

My response: Yeah, that’s a really smart idea. Have all sorts of people open up with their weapons into a crowd that is already in shock. Lots more people would have probably ended up shot than they did. Plus, it wouldn’t have stopped the guy initially. He came up behind Giffords and shot her in the head before anyone knew what was happening. He then opened up with a semi-automatic pistol filled with 32 cartridges. And it is obvious that, even if this lunatic knew that everyone in the crowd was armed, he would have gone through with his attack anyway. He knew he was going to be caught and possibly gunned down, and he did it anyway.

Narrative 5: The gunman wasn’t a conservative! He was a leftist! He said his favorite books were Mein Kamph and To Kill a Mockingbird!

My response: You are now insulting our intelligence. This is just one more example of saying the first thing that comes to mind that could possibly, just remotely possibly, be true and conservatives think this somehow addresses the issue. The guy wrote tracts, although just barely coherent, about the evils of government and how the government wants to control the population by the use of grammar. He was also on about U.S. currency not being backed by gold and silver. Plus, he specifically targeted a Democratic congresswoman he didn’t like for assassination. Does that sound like a liberal to anyone? All you can come up with to support your position is the guy’s reading list? And when is Mein Kamph a favorite of liberals?

There may be more narratives out there. I may update this post if I think of more.

I’ll just leave you with the latest cartoon from Tom Tomorrow, via Salon. I think he hits it on the head. 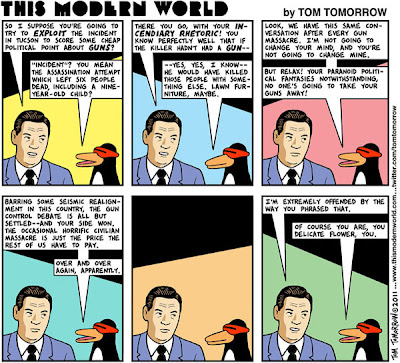