A few thoughts regarding the terrible destruction in Alabama and the rest of the Southeast. 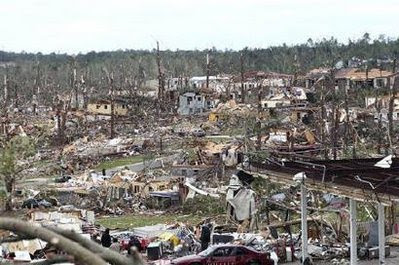 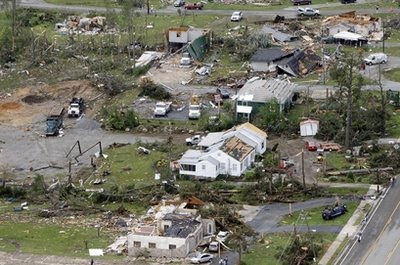 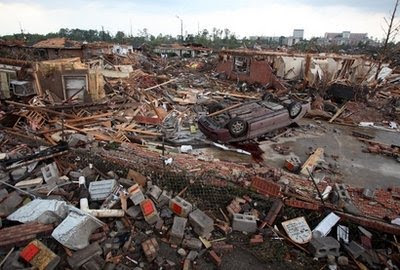 There have been a number of things happening in the last few days that I would like to comment on, but I think this one is the most pressing. The destruction due to a huge outbreak of powerful tornados is a little personal to me, as I used to live in Mississippi and Alabama. I finished up high school in a small town in Alabama, not unlike those just wiped off the map, about 45 miles from Tuscaloosa and lived in Birmingham for a couple of years. I still have a bit of a love/hate relationship with the South, as I think the mentality, attitudes and racism in that part of the country are ridiculous and belong more to the 19th Century than the 21st Century. I detested my time in high school there. But still, I know a number of people down there and have absolutely no desire to see this kind of tragedy visited on anyone.

I was always aware of the risk of tornados while living in Alabama and Mississippi, but it wasn’t a real “fact of life” like it is when I visit Oklahoma for my job. There, you know it is serious business. Maybe it’s just the difference in the amount of information available back in the 70’s vs. now. I do remember a small town about 40 miles away that was hit hard when I was in high school. We used to play them in football. That was a bit of a wake up. But I do remember some big time thunderstorms that were kind of frightening.

Actually, now that I have started writing this, I realize that I don’t have much to say, other than say how sorry I am this happened, which is worth exactly nothing to the people going through this and have lost their loved ones and their entire belongings.

Contribute to the Red Cross or other disaster relief programs if you feel so inclined.

I really hope that this isn’t the harbinger of things to come regarding extreme weather. But unfortunately, it feels like it might be, some people’s feelings about global warming and climate change notwithstanding.

Update: I got an answer to an e-mail I sent to an old friend who lives in Birmingham. He and his family are fine, but he said that the big tornado, the one that got Birmingham and Tuscaloosa, passed just 7 miles north of his house. MUCH to close for comfort, I would say, but there is also an old saying, "A miss is as good as a mile." Or seven.

I also hope that perhaps, just perhaps, many of the arch-conservatives that live in the Deep South might think a little better of the federal government after President Obama visits within two days of the event and pledges that the government will be there to help them during this terrible time. I believe that this is one reason a benevolent government like ours exists, for the benefit of its citizens, especially in time of need. Perhaps some others might change their minds when they are on the receiving end of this assistance.
Posted by zeppo at 7:41 AM