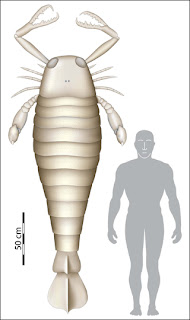 From the Discovery channel web site.

This was a bug you couldn't swat and definitely couldn't step on. British scientists have stumbled across a fossilized claw, part of an ancient sea scorpion, that is of such large proportion it would make the entire creature the biggest bug ever.

How big? Bigger than you, and at 8 feet long as big as some Smart cars.
The discovery in 390-million-year-old rocks suggests that spiders, insects, crabs and similar creatures were far larger in the past than previously thought, said Simon Braddy, a University of Bristol paleontologist and one of the study's three authors.

"This is an amazing discovery," he said Tuesday.

"We have known for some time that the fossil record yields monster millipedes, super-sized scorpions, colossal cockroaches, and jumbo dragonflies. But we never realized until now just how big some of these ancient creepy-crawlies were," he said.

The research found a type of sea scorpion that was almost half a yard longer than previous estimates and the largest one ever to have evolved.


I am refraining from making all sorts of comments about those 50’s giant bug movies. Well, I would make a comment, if I could come up with one that was really funny. Let’s just say that those weren’t all that farfetched. “AAAAA!!! THEM!!”
Posted by zeppo at 4:48 PM