A front row seat to a cosmic game of billiards? 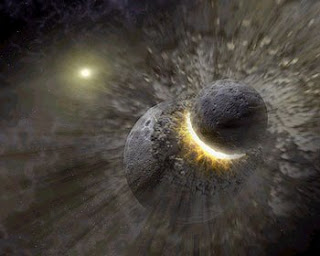 Man, this could be a very interesting show. From the LA Times, via the Everett Herald.

An asteroid similar to the one that flattened forests in Siberia in 1908 could plow into Mars sometime in the next few weeks, scientists said.

Researchers attached to NASA's Near-Earth Objects Program, who like to call themselves the Solar System Defense Team, have been tracking the asteroid for days.

The scientists, based at the Jet Propulsion Laboratory in La Canada Flintridge, Calif., put the chances that it will hit the Red Planet at about 1 in 300. That's better odds than any known asteroid has ever had of hitting Earth, except for the Siberian strike, the scientists said.

The unnamed asteroid is about 160 feet across, which puts it in the range of the famous Siberian rock. The largest impact event in recent history, that explosion felled 80 million trees over an area of 830 square miles.

Concerns about another strike on Earth led to the creation of the Near-Earth Objects Program and the pursuit of research into possible ways of deflecting a killer asteroid.

Scientists say it's unclear what the effects of such an impact on Mars would be. The Martian atmosphere is so thin that an asteroid would likely plummet all the way to the surface instead of breaking up above ground, as happened in the Siberian event.

Once it hit, it would probably create a large crater and send plumes of dust high into the atmosphere, scientists said. Depending on where it hit, the plume could be visible through telescopes on Earth.

The Mars Reconnaissance Orbiter, which is currently mapping the planet, would have a front-row seat. NASA's two JPL-built rovers, Opportunity and Spirit, might also be able to take pictures from the ground of the impact's effects.