How will the deniers of global warming explain an Earth with no polar ice cap? 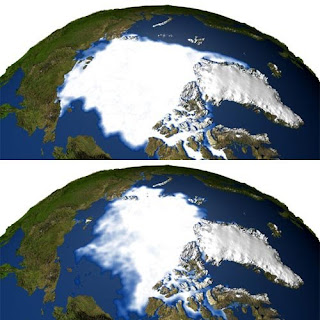 WASHINGTON - There's a 50-50 chance that the North Pole will be ice-free this summer, which would be a first in recorded history, a leading ice scientist says.

The weather and ocean conditions in the next couple of weeks will determine how much of the sea ice will melt, and early signs are not good, said Mark Serreze. He's a senior researcher at the National Snow and Ice Data Center and the University of Colorado in Boulder, Colo.

The chances for a total meltdown at the pole are higher than ever because the layer of ice coating the sea is thinner than ever, he said.

"A large area at the North Pole and surrounding the North Pole is first-year ice," Serreze said. "That's the stuff that tends to melt out in the summer because it's thin."

It’s pretty frightening that we have moved from the realm of the “possible outcomes” of global warming to the here-and-now reality. Just imagine our Earth without a northern ice cap in the summer months. Isn’t that enough evidence to convince the most devout ideologue or skeptic that something is going on, and it isn’t in some mythical far-off future that we can keep ignoring because it’s inconvenient?

No, probably not. The wingnut conservatives of this country have decided that the liberals are lying to them once again. That is much easier for them to deal with than actually believe that, 1) liberals may be correct about something, and 2) human society really needs to change how we are living on this planet, because things could get very ugly for the human race within our lifetimes. No, that’s too farfetched, liberals knowing something that we don’t and telling the truth.

Societies do not remain constant. Throughout history, we have seen civilizations start from humble beginnings, expand and grow, become great, and then wither and ultimately die. Rome, ancient Egypt, Mesopotamia, Greece, Inca, Toltec, Mongol, ancient China, the list goes on and on. Given that we are facing several major problems at once (the disappearance of cheap and abundant energy and global climate change, both of which could have severe impacts on our ability to produce enough food, water and habitable lands to support our population), we may be looking at the first major scale back of civilization on a global scale. If that is true, it may not be very pretty. “Society” may only be an outdated concept when it comes to hungry and desperate people looking for ways to survive. Wars for dwindling resources may become the norm.

I am appalled that polar bears are drowning. However, I look at the loss of the polar ice cap as a harbinger of worse to come in the not to distant future.

Icecap graphic from Livescience
Posted by zeppo at 8:56 AM