The move of the Seattle Supersonics to Oklahoma City takes a bit of a detour through the local courthouse. 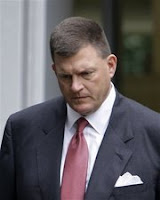 I have written a few times about this story before. See here, here, here, and here. I find the subject very riveting for several reasons, even though (as I have stated before) I really do hate NBA basketball. The latest disclosures in the Tim Donaghy officiating scandal has done little more than harden my resolve that there is much to dislike about NBA basketball.

That said, there are several reasons I am following this story. The first is about what this whole clusterf**k says about the mentality of Very Rich People. They want what they want, and they plan on getting it anyway they can. Lying, cheating and acting otherwise very unethically are S.O.P. I also find it very amusing when these jerks get caught with their hands in the cookie jar. “Contrition” and “remorse” are about as outdated as the Geneva Convention these days. The other reason I am following this is that it does affect my (adopted) hometown. I used to go to the Sonics when I first moved here in the 80’s, and they played in the giant concrete mushroom sometimes known as the Kingdome. Even though I dislike the game as it is played by the NBA, I am going to be very sorry when the Sonics finally pack up and move to Oklahoma City. The city will be a little less vibrant, somewhat diminished. And to Oklahoma City, of all places. I am sure there are nice people who live there, but this is the place that has a huge billboard of Toby Keith between the airport and getting into hotel row.

Anyway, I was going to talk about some of the latest developments from the court hearings. These are the “The Sonics v. The City of Seattle”. The one about Howard Shultz’s case against Clay Bennett for essentially lying to him, “Lack of Good Faith” I believe is how it goes, is later.

Neither side is particularly distinguishing itself here. The city’s case took a hit when one of their “expert witnesses” was shown that he was reusing his own writings for something he did about the city of Long Beach, California, I think it was. That’s great. Someone really ought to vet these “expert witnesses”. Anyone who has ever watched “Law And Order” knows how badly those doofuses can screw up a case.

But here is one point I wanted to bring up. I think Clay Bennett perjured himself the other day. It would be hard to prove it, but boy, the circumstantial evidence is rather compelling. Here is what the Seattle Times had to say about it.

Any other inference is inaccurate, he said Friday after the NBA Board of Governors voted 28-2 to approve the team's bid to move to Oklahoma City next season, pending the outcome of a June lawsuit from the city of Seattle.

In filings last week, the city revealed e-mails between the Oklahoma City-based ownership in which they spoke about moving the team to their hometown. The e-mails seemingly contradict Bennett's claims that he gave a "good-faith best effort" attempt to keep the team in Seattle after buying it July 2006, which was part of the sales agreement with former owner Howard Schultz.

On April 17, 2007, Sonics co-owner Tom Ward wrote co-owner Aubrey McClendon and Bennett: "Is there any way to move here for next season or are we doomed to have another lame duck season in Seattle?"

Bennett replied: "I am a man possessed! Will do everything we can. Thanks for hanging with me boys, the game is getting started!"

Ward replied: "That's the spirit!! I am willing to help any way I can to watch ball here next year."

On Friday, Bennett denied claims he acted in bad faith.

"I feel very bad about the misrepresentation of that particular e-mail; the fact that it's been misconstrued and been utilized in such a fashion, because I clearly recall that e-mail exchange," he said. "That e-mail exchange took place when I first learned that our bill had died in committee in Olympia, and that there would be no public funding forthcoming relative to our proposition.

"And my absolute feeling and emotion in that e-mail is I am a man possessed; I am only beginning; I will do everything I can to get this done in Seattle. And there's been an enormous misunderstanding of that, misrepresentation of that, misconstrued, I'm not sure which, but I was speaking about my commitment to a process in Seattle."

O.K., just LOOK at the context of that discussion. The discussion among members of the ownership group is CLEARLY about moving the team to OKC. The question to Bennett is: "Is there any way to move here for next season or are we doomed to have another lame duck season in Seattle?" And Bennett’s response is “I am a man possessed! Will do everything we can.” You tell me how that can be interpreted in any other way than he is possessed to move to OKC/not have another “lame duck season” in Seattle. There is simply no way that I can read this to come up with “I am a man possessed to keep this team in Seattle!” No flippin’ way. So, if you are under oath and you tell a whopper, doesn’t that constitute perjury?

The other thing I wanted to dwell on is the attitudes of these people. Very Rich People always seem to expect others to bend over backwards so they can become Even Richer People. Here is a snippet from Art Thiel of the Seattle P-I (one of the hands-down BEST sports columnists I have ever read):

Within days of the arena plan's death upon the Legislature's adjournment, e-mails disclosed in court Tuesday revealed that Bennett was on his way out of town. He wrote Joel Litvin, the NBA's No. 2 man, about how he can get out of Seattle, wrote to an Oklahoma City bureaucrat about reserving NBA dates at the Ford Center, and flew to Seattle to meet the local attorney, Brad Keller, whom he would hire to try to extricate him from the KeyArena lease.

That was four months before he filed papers against the city, and six months before the expiration of his agreement to use "good faith best efforts" to find an arena solution.

While it's hard to blame a guy for fleeing in self-interest, he knew the job was going to be dangerous when he bought a team with four years left on the lease. In addition, he was told by the natives how to fix the problem.

When Jim Kneeland, a longtime political operative and PR man hired by Bennett, said he needed to put up some of his own money, Bennett ordered him by e-mail to "stay way away" from saying anything about offering a private commitment.

Later, an e-mail from Kneeland to Bennett quoted Gov. Chris Gregoire on her position: "I appreciate the challenge faced by Bennett and partners, but they cannot expect taxpayers of Washington to solve their problem by constructing an arena with no direct participation on their part."

In exasperation late in the session, Bennett wrote to his lobbyist, Jenny Durkan: "I am confounded by the focus on our contribution. At end of the day, it will be negligible and has nothing do with the deal or the reality of the imminent need for the facility in the marketplace."

Absolutely amazing. This ownership group from Not Seattle Or Even Somewhere In Washington or Oregon decided they were going to come in, buy the local sports team and then DEMAND the local governments (state, city, county, it didn’t matter) build them a new $500 million arena. And they were not willing to put up ANY of their own money. Not for partial funding, not toward guaranteeing any cost overruns. None. And Bennett “didn’t understand” the fixation that many of the locals had with the lack of any offer to participate in the costs of building a hugely expensive facility that has, as its expressed purpose, to make Bennett and his partners money.

I cannot find the story I read this in, but one of the complaints by the Bennett and his owners group is that Key Arena (the facility where the Sonics currently play and was just given a major upgrade about 12 years ago, done with public financing) “does not have restaurants.” Yeah? There are several things about this. If public money WERE used to build a new facility for the Sonics, including “restaurants”, why does Bennett expect that he and his group would get the proceeds? He wants the city or state to build him a restaurant so he can run it and retain all the profits? Crap, I would like that kind of sweetheart deal as well. I would love it if someone were to come in and build me some guaranteed money making establishment and I didn’t have to contribute anything, yet I would get to run it and keep all the money. Just think how many people unhappy with their currently jobs or just flat out unemployed would just jump at a chance like that. Sounds like the New Deal, brought up to date with a vengeance. WPA for multi-millionaires!

It just is an amazing thing to watch the ruling class of this country (i.e., White Guys with Big Money) make absolute idiots of themselves. They don't even come off as halfway intelligent! How did they become the privileged class anyway?