Thoughts on Barack Obama’s historic nomination: the audacity of hope. 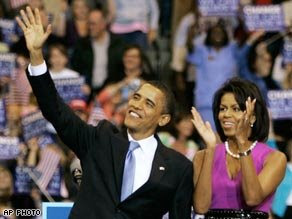 I haven’t been blogging very much, for a variety of reasons. I’ve been very busy at work, and am in the process of changing organizations. My home computer is tied up just about all evening, plus or minus about 45 minutes each side of dinner, by my wife and daughter. I had a bit of a disagreement with a tree that I was cutting down last weekend, in that it apparently didn’t appreciate being cut down. In the process of attempting to extricate my chain saw, which it had in a death grip, a very large tree splinter came very close to severing many veins, arteries, tendons and nerves in my wrist. I was exceedingly lucky and unlucky at the same time. I don’t really want to think about the possibilities that deeply. And, of course, I have run out of things to complain about regarding the Chimp-In-Chief and all his assorted thugs, enablers, obfuscators and the vast echo chamber that accompanies it all.

But I thought that I would take some time and write about my thoughts and feelings regarding the fact that the next President of the United States will likely be Barack Obama, a black man. Many people, including myself, have been so absorbed in the personal psychodramas of the various candidates of both the Democrats and Republicans that we lost track of what a truly monumental thing this actually is for the United States. I, for one, am exceedingly proud and amazed at the same time.

As a candidate, Obama is amazing. Yes, he is relatively young and “untested”. But to hear him speak is almost an otherworldly experience. I am a huge cynic, but even I get some goose bumps and allow myself to start thinking, “Maybe things really can change.” He really has captured the imagination of a huge percentage of the population of this country. From the perspective of just him as a person, a politician, he is doing great things for this country.

It’s difficult to talk about race and the fact that he is the first black man to successfully capture his party’s nomination. I, for one, don’t really want to slip up and sound something that sounds racist. It’s also very hard to get one’s hands around. But there is no way around this; this is an amazing moment in the history of this country. I think we regained some of the respect we lost with most of the countries of this world with his nomination. Obama is amazing about this very touchy subject as well. He goes out and acknowledges the issues and existing prejudices of many in the country without making that a central theme. He is saying, in effect, yes, it exists but we all have to go beyond that. And now is the time. Amazing stuff.

My family moved from Colorado to rural Alabama when I was in the 9th grade. This was in early 1970. When I look back on that, I realize it wasn’t that far (in time or distance) from the awful happenings in Philadelphia, Mississippi and Birmingham, Alabama. My step-father ran a drive-in restaurant that had outside service windows that were still marked “White” and “Black”. The “Black” window was around the corner of the building. I saw and heard some amazing things, and (I am ashamed and distressed to admit) I bought into some of that crap back then. My only defense was I was only 14 years old and we had no exposure to race issues in the small town in Colorado that I lived and went to school. I was witness to some of the overt and hidden racism that still exists in this country.

That is why I have been marveling at what has been going on during the Obama campaign. Black people and white people, along with people of many other colors and backgrounds, have stood shoulder to shoulder, cheering wildly for this person who has captured our collective imagination. Barack Obama drew over 70,000 people to hear him in Portland, Oregon last month. Staggering. He has managed to not only cross that white/black boundary for the most important position in America, he has vaulted over it to the extent that race is no longer a major issue in the minds of most people. We must go out of our way to remind ourselves how historic this moment actually is.

The Clinton campaign and its “What Does Hillary Want” mentality do not matter. John McCain and his metamorphosis from the engineer on the “Straight Talk Express” into a clone of George Bush do not matter. What matters is that this country seems to have turned a corner. We were getting there, little by little anyway, but this is the most visually stunning way of showing us, along with the rest of the world, that we are ready to make that leap. Now, we just need to make that one last step and actually elect the man.

I still harbor very few illusions about our society and our ability to cope with the huge problems that are going to face us in the very near future. However, for the first time in a very, very long time, I do have a small glimmer of hope. Maybe things can really change for the better, and we can overcome some of our shameful past at the same time. That would truly be an amazing thing to behold.

Labels: good news for a change