So, the wingnuts are now all FOR AIG bonuses. 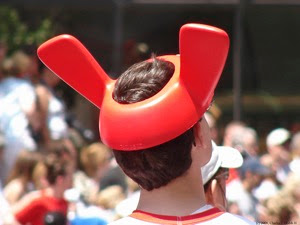 These guys took huge financial risks with house money, because all possibilities penalties for failing have been removed. They ran their company into the ground and, in the process, made a huge contribution to sending the U.S. economy into the tank. They failed as completely as anyone can possibly fail, and they STILL believe that they are somehow entitled to huge bonuses, more money in one chuck, than most ordinary people will ever see in their lifetimes. And this money is coming from the taxpayers, which a lot of people supported because we believed then and still believe now, that we needed to do this or else our economy would melt down completely.

Ah, but since many people, including Democrats, liberals and the President of the United States, have expressed outrage over this, the wingnut right has decided that, due to their unwavering principles, they MUST support anything that the Democrats oppose.

From Washington Monthly, here are some examples:

Rush Limbaugh recently said: "I am all for the AIG bonuses" and attacked the Obama administration for trying to undo them. He also blasted Dem efforts to get the names of the AIG bonus recipients as "McCarthyism."

Fox News followed suit, also comparing Dems to "Joe McCarthy." And Sean Hannity has now derided efforts to tax the execs by saying: "In other words, we're going to just steal their money."

There's not really a direct contradiction between the GOP leaders' professed outrage over the bonuses and the conservative media's condemnation of efforts to recoup them. But the conservative attack on Dems is rooted in free market orthodoxy, which GOP leaders have implicitly ditched in order to get outraged.

This split could muddy the GOP message and even compromise the party's efforts to use AIG to damage Obama.

Photo from Christy at Firedoglake.

UPDATE: If you have read this far and are interested in my rant, you might want to go check out the comments. Someone called me a "retard" and went on to take issue with my post. I then responded... *Sniff* Why can't I meet NICE guys on this blog? Everyone just calls me names and then leaves...
Posted by zeppo at 8:53 AM