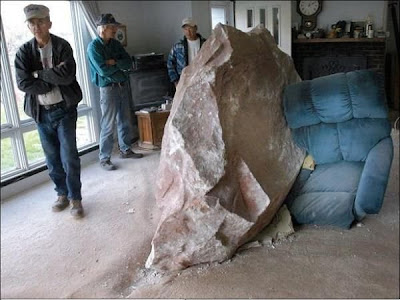 "I dunno, Earl. I was just about ready to sit down and listen to Rush on the radio when this here rock came right through the ceiling and dun squashed my favorite chair.!"

Apparently, the Earth just had a near miss (or actually, a “near hit” is more appropriate) with a cosmic visitor. From Yahoo News:

PASADENA, Calif. – An asteroid about the size of one that blasted Siberia a century ago just buzzed by Earth.

The asteroid named 2009 DD45 was about 48,800 miles from Earth. That is just twice the height of some telecommunications satellites and about a fifth of the distance to the Moon.

The space ball measured between 69 feet and 154 feet in diameter. The Planetary Society said that made it the same size as an asteroid that exploded over Siberia in 1908 and leveled more than 800 square miles of forest.

Most people probably didn't notice the cosmic close call. The asteroid was only spotted two days ago and at its closest point passed over the Pacific Ocean near Tahiti.

You know, as comsic distances go, that’s pretty close. I suppose we can all do a collective “Whew!” and wiped our brows. It’s really only a matter of time, I suppose, before we take a direct hit. It may be next year, and it may not be for several hundred million. I still like our odds, even though an event like that gives one pause.

One upside of taking a hit from an asteriod, though, is that it might do wonders to clear up that nasty “global warming” thing we have going on.
Posted by zeppo at 8:09 AM