What is it with Oklahoma anyway? 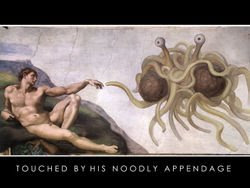 I don’t really mind insulting individual persons, like the truly insane James Inhofe, senator from Oklahoma. However, one person’s insanity shouldn’t really be used to come to a blanket conclusion regarding a large population of people. But really. I am really beginning to wonder about who votes in the elections in Oklahoma. Do they really believe we are still in the 1700’s?

Here are some excerpts from the two bills. (From religionclause.blogspot via Washington Monthly.)

[T]he Oklahoma House of Representatives hereby expresses its disapproval of the current indoctrination of the Darwinian theory of evolution at the University of Oklahoma and further requests that an open, dignified, and fair discussion of this idea and all other ideas be engaged in on campus which is the approach that a public institution should be engaged in and which represents the desire and interest of the citizens of Oklahoma


...[T]he Oklahoma House of Representative strongly opposes the invitation to speak on the campus of the University of Oklahoma to Richard Dawkins of Oxford University, whose published statements on the theory of evolution and opinion about those who do not believe in the theory are contrary and offensive to the views and opinions of most citizens of Oklahoma.

One very astute commenter at religionclause noted the following:

Umm . . . aren't these two statements in open contradiction? The first statement valorizes the "open, dignified, and fair discussion of [evolution] and all other ideas." The second condemns Univ. Oklahoma for inviting Richard Dawkins to campus, presumably for . . . an open, dignified and fair discussion of his ideas. Seems the OK legislature needs to bone up on it's logic.

I am not a religious person and do not really understand the seemingly basic need to explain the universe in other-than-scientific terms. But I do try to be mindful of other people’s beliefs, and I try not to say insulting things (unless they insult my beliefs, or lack thereof, first). But really, folks. When fundamentalists start objecting to teaching biology, that isn’t being supportive of your religion. That is trying to impose a religion of ignorance on everyone else. I’m sure UO won’t buckle to these small-minded buffoons, but just ponder where a mindset like this might take us. Are we to go back to the days of blood letting (along with getting a haircut) as a way of maintaining good health? Shall we all go back to believing that the Earth is the center of the universe, because do to otherwise would infer that human beings aren’t all that important in the grand scheme of things?

I thought we, as a civilization, had dispensed with this nonsense hundreds of years ago. Sheesh.

Dunkley and his father, Daniel Reddy, who live in Tulsa, went to Broken Arrow on Tuesday night for a hunter safety course normally required to get an Oklahoma hunting license....

But when father and son arrived at the lesson, the volunteer instructor, Kell Wolf, asked if any of the students voted for President Barack Obama.

Reddy, a transplanted Californian — and former Marine — raised his hand.

According to Reddy and others in the room, Wolf called Obama "the next thing to the Antichrist" and ordered Reddy and Dunkley from the room. When Reddy refused, Wolf said he would not teach "liberals" and would cancel the course if Reddy didn't leave.

So Reddy and Dunkley left, as did a few others.

I've said it before and will no doubt say it again. The hardcore conservatives of this country have determined that liberals are not even humans. We are not to be tolerated, we are not to be cooperated with, there is nothing that can be gained from exchanging ideas with a liberal... No doubt if people like this were given total control, we would end up sewing a yellow capital "L" onto our clothes.

And people call liberals "angry".
Posted by zeppo at 8:12 AM