Did you know that Christians can’t be Democrats? 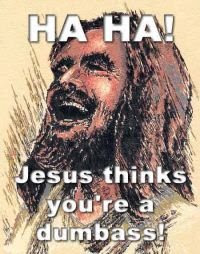 It’s true! At least, it is true according to those nice people who run Jerry Falwell’s Liberty College. From Washington Monthly:

Liberty University, the evangelical school in Virginia founded by the late Rev. Jerry Falwell, is drawing heat Friday for its decision to revoke recognition of the College Democrats' chapter on campus.

According to the Lynchburg News & Advance, the school decided a week ago the organization "stood against the moral principles" held by the school and therefore could no longer be sanctioned.

Maria Childress, the staff adviser to the club, told the paper the school -- which opposes abortion rights and gay marriage -- had issues with the Democratic Party platform.

Childress says she was told by Mark Hine, the vice president of student affairs, that "'You can't be a Democrat and be a Christian and be a university representative.'"

So, after initially approving the College Democrats club, they changed their minds and revoke the club charter. But, of course, it’s not that those fine folks feel like any political activity and going to college don’t mix. No, it’s only Democratic political activity that is hostile to those values held dear by administrators of Liberty. No open mindedness here, please! No diversity of opinions necessary!

Liberty is a private institution and they can do as they please. But this does absolutely nothing except publicize the fact that "Liberty" U is the closed minded, tribalistic institution that everyone knows it is but doesn’t really talk about. It’s just one more example of the entire “we encourage you to join us, just as long as you believe and act exactly like we do!” mentality that pervades the conservative psyche these days.

I just find it amazing that there were enough Democrats actually enrolled at Liberty to make up a club. To me, that’s a bit like being a gay Republican. You are going to have to dig deep to find some reasons for your decision that you can live with. Liberty, pfftt...

Photo from TBogg.
Posted by zeppo at 7:51 AM