Another truly maddening case of "It’s O.K. If You Are A Republican" (IOKIYAR). 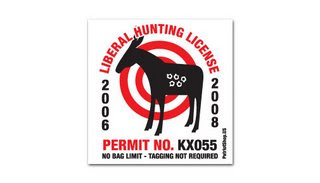 It’s truly amazing what Republicans (or Rethugs, as I like to call them, as that name sort of says it all) get away with. Things that cause the wingnuts to go incendiary are legion. Democrats make the slightest misstatement, or even make a perfectly reasonable statement that can be taken out of context and replayed over and over, and the Rush Limbaughs and Sean Hannities of the world send out the signal that their rabid listeners should start howling with outrage. The press picks it up and it becomes the story du jour for several news cycles, if not longer.

A good example of this is Michelle Obama’s comment when she said she was “proud of this country for the first time” after during her husband’s campaign. I understood perfectly what she meant. This country, after all, has a history of violent racism, subjugation and, going back a bit further, slavery of an entire race. O.K., it’s perfectly reasonable to assume that she meant, now that the country seems to be not only willing but desiring to elect her husband, a black man, as President of the United States, she is proud that the country may have finally overcome some bit of its racist past. That marks a pretty significant departure from our past. That was obviously the context in which she spoke. Yet, the wingnuts went wild. To illustrate, here’s a link to Faux News and another one to Michelle Malkin. (Note: the only reason I am providing real links are that I wanted to give real examples, not a second hand, unsubstantiated statement and I also know they aren’t going to get much in the way of traffic from my blog links.) Anything to manufacture a little outrage. Actually, a lot of outrage. And this is still going on. Listening to these idiots, Michelle Obama is a racist who hates America. Give me a frickin’ break.

Yet, Rethugs and their wingnut echo chamber get to make all sorts of statements and the press lets them get away with it, scott free. Here is something that ex-presidental contender Mike Huckabee said about Michelle’s husband, Senator Barack Obama. Via dday at Hullabaloo:

“That was Barack Obama, he just tripped off a chair, he's getting ready to speak,” said the former Arkansas governor, to audience laughter. “Somebody aimed a gun at him and he dove for the floor.”

I can understand how there are always going to be people that have a rather sick sense of humor and stay very stupid and vile stuff. But when it comes to a public forum and high publicity value people like Mike Huckabee, why does our press continually let these people get away with this?

Personally, I disagree with Michelle Obama. I am not very proud of this country, and haven’t been for about the last 25 years. The last seven, however, have been pure hell.
Posted by zeppo at 7:43 AM