Sooo… Rachael Ray is a terrorist loving, America hater who just happens to like coffee and donuts? 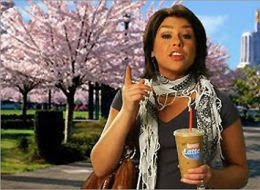 Many blogs and a few TV personalities like Keith Olbermann have jumped on this. I might as well join in. Here is a summary of what has transpired, so far, from HuffPo.

The Boston Globe reports that Dunkin Donuts caved to pressure from the conservative blogosphere — and the fear of a mass boycott — and removed the ad:

The company at first pooh-poohed the complaints, claiming the black-and-white wrap was not a keffiyeh. But the right-wing drumbeat on the blogosphere continued and by yesterday, Dunkin' Donuts decided it'd be easier just to yank the ad.

Said the suits in a statement: ''In a recent online ad, Rachael Ray is wearing a black-and-white silk scarf with a paisley design. It was selected by her stylist for the advertising shoot. Absolutely no symbolism was intended. However, given the possibility of misperception, we are no longer using the commercial.''

Malkin praised the decision in her column, writing,

It's refreshing to see an American company show sensitivity to the concerns of Americans opposed to Islamic jihad and its apologists. Too many of them bend over backward in the direction of anti-American political correctness....

Fashion statements may seem insignificant, but when they lead to the mainstreaming of violence -- unintentionally or not -- they matter. Ignorance is no longer an excuse. In post-9/11 America, vigilance must never go out of style.

Malkin has previously lauded Dunkin Donuts for its support of immigration laws.

Many, many people have commented on how insane this actually looks. (Love you, Sadly No!) Michelle Malkin called for a boycott of Dunkin' Donuts because of a scarf? An Arabic looking scarf!?! My first thought (besides “give me a f**kin’ break) was, we have a national media personality asking for a boycott because of a fashion that MIGHT have come from some foreign country? I got news for you, MICHELLE. NOT ALL ARABS ARE TERRORISTS!! You are upset that anyone might actually wear some article of clothing that… Man,I can’t even begin to put this together. Jeeesuus Christ. You know, we are supposed to be friends with Saudi Arabia. Just ask George Bush. He's kissed them often enough, both literally and figuratively. Egypt? Not to mention all the Arabic Americans who are actually, like, AMERICANS.

You know what I would find refreshing, Michelle? Non-insane people!! I can only hope that all this insanity on the part of the rightwing goobers of this country is that they realize they are going down, they are in the process of losing whatever influence they feel they might have had, and they don’t much care for it.

One can only hope. Maybe, one fine day in the near future, they will be totally irrelevant.
Posted by zeppo at 6:00 PM