The definition of propaganda, as practiced in the 21st Century by the United States? 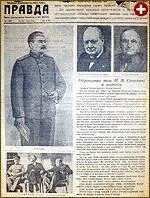 Military “analysts”, briefed by the Pentagon, on all national media outlets before and during the Iraq war to sell the war to the American public. THAT’S what I call propaganda. Along with a lot of other people who are actually, you know, paying attention, I have been very upset with this story. Many bloggers have been writing extensively about this. See Harry Shearer and Jeff Cohen, both writing for Huffington Post for all the gory details. The national media? Nary a peep. That’s part of the scandal, in my mind.

There are two different parts to this; both of them are worthy of the bright light of detailed investigation by outside sources. The first is that these so-called “analysts” were actually part of the Pentagon’s propaganda effort to sell the war to the American public. That is what their job was, and the story, as it is coming out, fully confirms that. Take this quote, for instance, from Crooks and Liars:

Glenn Greenwald sheds more light on how the Pentagon was so very thrilled by these faux military experts.

The key issue here is that more and more, media analysts are having a greater impact on the television media network coverage of military issues. They have now become the go to guys not only for breaking stories, but they influence the views on issues. They also have a huge amount of influence on what stories the network decides to cover proactively with regard to the military. . . .

1.) I recommend we develop a core group from within our media analyst list of those that we can count on to carry our water. They become part of a “hot list” of those that we immediately make calls to or put on an email distro list before we contact or respond to media on hot issues…

You can’t really get too much more precise than that about what they were attempting to do.

The second part of this is how complicit the national media is in this story, and continues to be complicit in the cover-up. The biggest criticism of the press BY the press on this has come from Keith Olbermann on MSNBC and on NPR. That’s about it. Every other national outlet, print and electronic, has been silent on their role in helping the Pentagon “shape” the public’s perception of the war. What’s just as frustrating is how anyone with a differing point of view, i.e., against the war or even being skeptical of some of the claims being made, was made into a into some sort of kook. Being skeptical of those claims or being flat-out against the war became an extremist point of view, and as such, was not invited on any national outlet to debate some of these so-called “experts”. That is a purposeful and successful attempt at limiting the discussion and driving it to a predetermined conclusion. That is, war was an inevitable as it was necessary and that anyone who said otherwise wasn’t worthy of even listening to.

And these same “news” outlets are now refusing to carry this story, as it shows them in a bad light. I can’t figure out if they are just too embarrassed to admit the truth, or they are still actively working to shape the public’s perception of the war and fully realize what they are doing and how they are doing it. I am actually betting on the second choice. That is a terribly thing to say, but I think our media (and not just Faux News, whose agenda has been obvious for some time) is actively working with the Bush administration and its gaggle of neo-con advisors to shape the public’s mindset. They all still believe, to this day, that the media was the reason the United States lost the Vietnam war, and they are determined not to let it happen again. I can think of no other reason than the New York Times hiring Bill Kristol, Newsweek hiring Karl Rove, CNN hiring Tony Snow, etc., etc. The national media has, for the most part, given up even attempting to be fair and even handed. Our national media has an agenda, and it isn’t to keep the public informed.

The citizens of the United States of America, to this day, continue to be led by the nose by the Republicans and neo-cons and willingly assisted by our press. And most of the public is buying this con job! That is what I find so frustrating and downright amazing. Seeing how badly this administration has handled the Iraq war, both getting into it and actually executing it, how it is very obvious that we have been lied to and mislead at almost every opportunity, we are still buying it. The case is being made for war with Iran. And we are letting it happen.

I cannot believe this country at this moment. What has happened to us, that we have so lost our way in every sense of the word?

Photo of Pravda from here.
Posted by zeppo at 12:18 PM