Senator Clinton invokes the assassination of Bobby Kennedy as a reason to stay in the Democratic race. 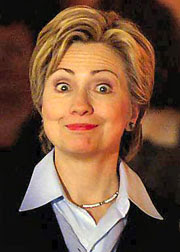 And, according to Keith Olbermann’s commentary posted at Americablog, this isn’t the first time she has said this, either. Go read or watch the entire thing, it’s worth it. She implies that she needs to stay in the race because someone might assassinate Senator Obama, the first black man who is the frontrunner to become the next president of the United States. If she didn't mean that, I have absolutely no clue as to what she did mean. It isn’t like this isn’t a real concern, given the amount of hate filled people in this country who also have easy access to guns, or that they aren’t being stirred up already by the lunatic pundits and radio shock jocks. This country has already seen the assassination of Martin Luther King and Medgar Evers, leaders of the movement to empower black people of this country. And then, she has the audacity to apologize to the Kennedy family, but not Obama!

She is rightfully getting her butt handed to her in the press, by everyone. I do notice that the Democrats are among the most vocal. That’s one difference between the Democrats and Republicans. Republicans can say anything crazy they want and the party will find a way to dismiss it and bash the critics. Democrats say or do something beyond the pale and there is no hesitation in them getting nailed by their own party. But, that isn’t my main point here.

Clinton has become like every other politician that becomes too enamored of himself or herself, or else becomes too desperate. They feel that they are allowed to say anything that comes into their heads to justify their claims or actions, and it’s the audience’s fault if they take it somehow badly. I used to really like Senator Clinton. I once heard her speak and she was great. But she now sounds a lot like George Bush. Her rationalizations for staying in the race change on a weekly, if not daily, basis; just like Bush’s rationalizations for why we are in Iraq or why tax cuts for the rich are a good thing. She will say and do anything in order to advance her own goals, and she has lost sight of the fact that she is starting to resemble a complete and utter lunatic.

I can’t figure out Ms. Clinton’s psychological makeup here. I really can’t. Is she that much in thrall to her drive for power that she becomes blind to every other concern? I have a difficult time any one person could be that much of a narcissist. She apparently can’t even recognize the damage she is doing to herself, much less the Democratic party. She used to be one of the party “elders”, whether that label was deserved or not. She was respected and held a position of great influence within the party. She is rapidly making herself into a pariah. Is that what she really wants? Even if she were to somehow snatch the Democratic nomination from Senator Obama, does she not recognize the cost to both herself and her party?

Hillary Clinton photo from here.
Posted by zeppo at 7:55 AM