I’ve heard it said that the duckbill platypus proves that God has a sense of humor. 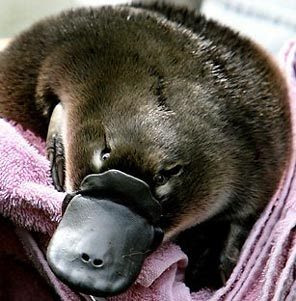 I wouldn’t argue that point, if I happened to believe in God. Well, not the God of the Hebrew Bible and the many manifestations that have sprung from that source. But what I want to know is, does the existence of the platypus prove or disprove evolution? Because, either way, it’s pretty strange.

Here we have a nominal mammal, yet it has an actual bill like a duck. It lays eggs and they hatch outside the mother’s body. The mother lactates milk to feed her young, yet she has no nipples. The platypus produces a poison, like a reptile, but stores the poison in the legs. And as weird as that all is, the scientific findings are even weirder!

From a story in the Seattle Times (also the source of the photo):

One of the more surprising elements was the animal's system for sex determination. Most mammals have two sex chromosomes, either two X chromosomes (to make a female) or an X and a Y (to make a male). Not only do platypuses have 10 instead of two, but some of those resemble the Z and W chromosomes of birds more than standard-issue X's and Y's.

Moreover, the key gene on the Y chromosome that confers maleness in most mammals is not present on any of the platypus' sex chromosomes. It is on another chromosome, where it seems to have nothing to do with sex. In its place, another gene seems to be central to sex determination in platypuses, evidence of a shakeout of various evolutionary efforts to settle on a system of sex determination in early mammals.

Other genes show how platypuses were transitional creatures on the road from egg laying to internal gestation. There is just one gene for one kind of yolk protein, for example, while chickens have three.

That is consistent with the idea that the platypus represents a shift in strategy toward providing more nutrition after hatching.

I understand that evolution of species, as it is currently envisioned, is not a nice, concise thing that has an orderly progression from one stage to the next. Lots of wrong turns, dead ends, distant relatives that look alike, close relatives that don’t look alike. But the existence of the platypus and the fact that have 10 sex chromosomes compared to the 2 that all other mammals have, well, that’s just plain strange. What kind of twist down the evolutionary tree could have possibly resulted in a mammal with a duckbill and venom that looks remarkably like snake venom delivered by little spurs on its legs? Something like that does not seem to have anything natural to trace to.

It’s just one more mystery that we will probably never understand. Unless, of course, you accept that thing about the sense of humor.
Posted by zeppo at 6:31 PM