I am extremely depressed to discover that we have so many Neanderthals living in the U.S. today. 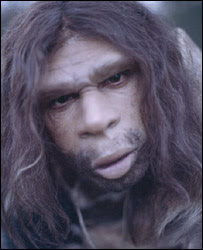 I imagine Neanderthals to be very short tempered, brutish, extremely territorial, suspicious of anything new or novel to the nth degree, and when they react negatively to something, they go all-out. They have little use for the basics of social decorum. No, when they want someone to know they are unhappy or upset, nothing else than a full-fledged episode of rock throwing and club bashing will do.

Neanderthals also can’t read and their skills at logical reasoning stops with figuring out how to bring down a woolly mammoth with a bunch of spears. They are easily goaded into fits of anger and righteous indignation by tribal leaders who also offer no sense of rationality or common sense.

The tendancy for Neanderthals to totally wig out and lose all semblance of rationality leads them to take the following actions:

• Declare that attempting to ensure that all Americans have adequate health care coverage is JUST LIKE what the Nazis did during WWII when over six million Jews, Gypsies, homosexuals and other "undesirables" were systematically murdered.

• Carry loaded guns to meeting places where President Obama is speaking. (Remember that people were arrested just for carrying protest signs within a block of where President Bush was.)

• Declare that Obama and the Democrats are just chomping at the bit to be able to set up death panels where they can declare that your elderly grandmother should be denied any more care and be left to die, to declare a phamplet written under under the Clinton Adminstration and updated under the Bush Administration for vets about end of life issues is now Obama’s Death Book which encourages veteran to kill themselves.

• Believe that breaking all sorts of laws and treaties to torture people who might be suspected of having any sort of ties to terrorism is fine, but looking into those crimes is a terrible idea.

• Oppose any sort of action that is proposed by President Obama or the Democrats, just because those people have been identified as “The Enemy”, even for those actions that would provide many benefits to the Neanderthals themselves.

Etc. etc. I just don’t have the heart to keep going. It’s all very, very depressing to live in a country whose population seems to include a large majority of Neanderthals. I just didn’t realize the situation we were all in. I had thought that Neanderthals had gone extinct long ago. Imagine my dismay when I discovered that I was very wrong.