Wherein I take my turn as Sarah Palin’s speechwriter. 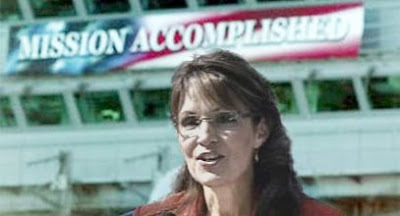 Today, I am proud to stand before you and all great Americans, knowing that America is a free country full of democracy and other things, to tell you that about the great things I did as governor of the great state of Alaska, where eagles and bears and elk and salmon all live and play and enjoy freedom of speech and can own guns. By stepping down as I did one and a half years before the end of my first term, I showed all the naysayers and people who actually like “gloom and doom” all the time, including the press and David Letterman, that I can govern effectively and accomplish things that are good, not only for Alaskans, but for all Americans, including our brave troops, who put their lives on the line every single day for people who want to tear this country down. Some people say that America is no good. But I have news for them! The salmon are swimming upstream, and the mountains are really tall and beautiful, with snow on them. So, you see, by stepping down as governor, I didn't put Alaskans through all that stuff where I would have to go on junkets and waste all their time and money and be that dead fish that I spoke about so eloquently before. So, now that I am not governor anymore, I can accomplish much greater and wonderful things for not only Alaska, which, by the way, did I tell you has eagles and bears?, but for all Americans! I am now in a much better position to accomplish these great things, without the burden of having an actual job in politics, where politics as usual leads to all sorts of bad things that liberals and President Obama support, like terrorism and a failing economy. I'll be that point guard, keeping my head up, so I can give the ball up and leave the game at the best possible time and let the rest of my team play the game so they can win the game by themselves. So, you people in the press? You know, you guys with the cameras and microphones? How about you just stop making stuff up? Our brave soldiers died in Iraq so that I could run for Vice President and have all those nice clothes, which you made into such a big deal that I had to give back some of them. And it is not nice at all to go after my family like that. My family is the very model of a good, clean American family, even though Todd did belong to the Alaskan Separatist Party for seven years, he had no idea that they really don’t like America, because Todd and my family all love America, so you should leave my family alone. My daughter Bristol, who is an unmarried single mother, is a daughter every mom in America would be proud of and is representative of everything the Republican Party stands for like abstinence and virtue! So, take that, David Letterman! But enough about me. It’s our great country I want to talk about, and our brave soldiers.

Thanks very much. No questions, please.
Posted by zeppo at 7:52 AM