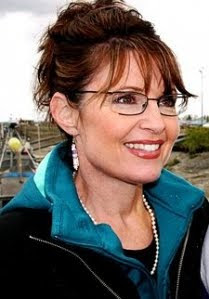 I have always wondered how Sarah Palin sees herself. No doubt, she really sees herself exactly as she describes herself to the rest of us. And she wants as much power as she can gain, which she probably admits to herself, and she will pander to and use almost anyone in order to achieve that goal. However, it would see that most intelligent people would even set limits on what you might say. But in Palin’s case, no. She’s off and going after that 10% of the country who really believes that President Obama intends to kill people with his “Obamacare.” From Washington Monthly:

As more Americans delve into the disturbing details of the nationalized health care plan that the current administration is rushing through Congress, our collective jaw is dropping, and we're saying not just no, but hell no!

The America I know and love is not one in which my parents or my baby with Down Syndrome will have to stand in front of Obama's "death panel" so his bureaucrats can decide, based on a subjective judgment of their "level of productivity in society," whether they are worthy of health care. Such a system is downright evil.

I cannot comprehend how someone can possibly look at what the Democrats are proposing and come up with a “death panel” that decides who lives and dies. If she actually believes this, then she has to be one of the stupidest and most easily manipulated people I have ever seen. On the other hand, if she knows this is a fabrication or even if she doesn’t care, one way or the other, if it is true, then she epitomizes the absolute worst of human nature.

And, as a follow on, what do these people think that insurance companies do now when they decide not to approve a liver or lung transplant, or refuse to pay healthcare costs that they should rightfully be covering? That, right there, is your bureaucratic panel that decides who lives and dies! Many people would rather imagine horrible things that might come to pass because of their hatred and distrust of those they have decided are their enemies, but they refuse to see the exact same things going on right here and now!

I just cannot imagine how bad this is going to get in the coming years.
Posted by zeppo at 7:18 AM