Some thoughts so far regarding, "Idiot America: How Stupidity Became a Virtue in the Land of the Free" 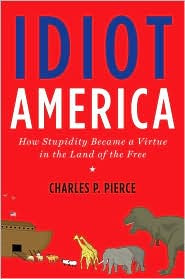 That’s the name of the book I am reading. The author is Charles P. Pierce. I ran across the title somewhere during my trek through the liberal blogosphere. It sounded right up my alley, since this topic is one that I have been rather upset about for years and has been, directly or indirectly, the subject of many of the posts I have made here.

I am still working on the book, so I can’t give the complete review at this point. It starts out with a few observations about the Creationism Museum, which depicts friendly dinosaurs with saddles on them and proudly asserts that Noah took all these dinosaurs on the ark with him. (So, are dinosaurs “clean” or “unclean” animals? Because Genesis states that God commanded Noah to take two of every unclean animal, but seven of all the clean animals. That’s just one of the many contradictions in the Bible.)

Here are a few more points that have been made in the first few chapters.

• There are no experts anymore in America. Or that everyone is an expert, which is the same thing as having no experts.

• There are two valid sides to every discussion, each of which must be given serious attention, especially when it comes to the mainstream media, regardless of how idiotic one side might actually be.

• Strong belief in something makes it true. The more believers something has, the more true it becomes. Facts have little to do with anything.

• The mainstream press does not exist to report on facts and truths. They see their job as throwing stuff out there that they have been told and letting the audience decide.

• Our society has always had, and will always have, its cranks. However, where cranks used to be sort of marginalized with a very small audience, they are immeidately given credence by major book deals and being interviewed on television news shows.


None of this comes as any surprise to me or should to you. I have either concluded the same things myself or have read the same points made in many of the liberals blog sites I read. But it is interesting to see the whole case put together in a single place.

I think this is the aspect of the United States that I am most upset about. Yeah, I am pretty pissed off that we have somehow normalized torture, where torturing prisoners who have yet to be proven guilty of anything is not only acceptable but required, even if those prisoners die or can’t ever be released because they would cause us a lot of trouble after being tortured. But it’s this “dumbing down” of our society that has me the most upset. I degrees in engineering and science, so it is very painful to me to somehow see unsupported, nonsensical beliefs having the same measure of validity as those conclusions reached after decades, and sometimes centuries, of scientific inquiry. It is as if many people in this country really desire to go back to the 16th century. We should toss aside all our gains that we have made as a species, just so we can satisify these crackpots.

The points made above seem to explain something that has really puzzled me in the last few years. I was completely flummoxed by the fact that Republicans and conservatives seem to celebrate ignorance. Oh, that’s not the way they put it, of course. They are more for “the common man.” Who, in my mind, just happens to be rather ignorant and usually rather proud of his or her ignorance. George Bush is a great example. Sure, many people said that he would be the person running for president that they would “most like to have a beer with.” That’s a fine conclusion as far as it goes, but I don’t need to point out that it has very little to do with that person’s qualification for the highest office in the land. Sarah Palin is another fine example of proud ignorance being elevated. “Joe the Plumber”, who is neither Joe nor a plumber, is another. How someone can be plucked from obscurity like that and, all of a sudden, become an iconic figure within the Republican Party dumfounds me to the extreme. I want my leaders and experts to actually have proven experience to show that they can be effective leaders and are knowledgable experts.

I have nothing against the so-called “American Dream”, the Horatio Alger story of the common person overcoming overwhelming odds to hit it big. But in my world, that “common man” overcomes these obstacles with hard work and wisdom. That’s what enables them to overcome everything and ultimately find success. My big example of how I think this should work is Barack Obama. I don’t know how much more of a shining example of a success story we have in today’s world. Well, Sonya Sotomayor is another pretty good example. Both of those people overcame significant societial obstacles, made it into elite schools, produced great grades and worked their way through the system to ultimately reach the highest pinnacle. That’s my concept for how the American success story should work.

On the other hand, Republicans and conservatives seem to think that all that is required is that someone hands success to you. George W. Bush was born with the greatest advantages this country can offer, like being white, rich and the son of a very famous person. He was essentially given several companies by his dad’s rich friends, which he promptly ran into the ground. If he hadn’t started where he did, there would be no way this person should ever become President of the United States. Stuff has been handed to Bush on a silver platter his entire life.

Sarah Palin is another fine example of what the Right worships these days, and this is what bothers me the most about Sarah. Like President Obama, she also came from humble beginnings. I have nothing against that. However, her achievements, such as they are, can only be described as mediocre. She stumbled through four colleges before finally getting a degree. She has bounced around every job she has had, and has, to this point, quit on every single elected position she has held. Every time she opens her mouth in an unscripted moment, and even many scripted ones, she induces cringes and embarrassment in those of us that have the slightest bit of self-awareness and who can make somewhat unbiased assessments that are not solely based on ideology. But a significantly large percentage of the people in this country still love Sarah. I am just amazed that this can be so. There are probably a few people that support her because she pisses off liberals. However, in my mind, that is not a very intelligent rationale for wanting someone to be President. There has to be something more, and I guess it is because she is seen as “one of them.” The common folk. Someone who they can relate to. Someone who they would want to have a beer with. And, of course, it doesn’t hurt she is pretty.

Before the election last year, I heard one person (who just absolutely leaked certitude so that it made small little puddles around his feet if he stood still for more than a few moments) say that he wished he could vote for Palin for president, because “she is obviously the most qualifed of the four (i.e., Obama, Biden, McCain and Palin)”. I am just absolutely astounded that any rational person who listened to Palin speak for more than about three minutes could possibly arrive at this conclusion. That is complete nonsense. But this guy was obviously somewhat successful at what he does for a living, so he can’t be an imbecile. He just obviously has very different standards than I do when judging someone. I just can’t figure out how someone can actually have those standards.

So far, the book seems to be describing this in something of a past tense, in that the country is finally recognizing its folly and is slowly pulling back from the brink. However, given what has been going on this year since Barack Obama was sworn in as President, I am not so sure. It seems like the insanity has been ratcheted up a few notches. Public figures are making some absolutely insane statements (such as Glenn Beck asserting that President Obama hates white people and is a racist), and hardly anyone besides the liberal blogs is pointing out how absolutely insane this all is. Maybe it’s the fact of a black man as President that has sent many over the edge. I don’t know. But I do know that it doesn’t appear that the insanity that drives the dialog in this country is going to subside any time soon. I find that prospect very depressing.

UPDATE: I finally finished reading this book. I had put it down for a week or so, and it quickly stretched into a month and a half. Once I picked it back up, I finished it that night.

The second half of the book definitely picks up the pace. The first half of the book is more about generalities. The second part really gets into some specific topics. It has individual chapters on the unfortunate Terri Schiavo media circus. I hadn't realized how bad that was. It certainly had some incredibly negative impacts on other people than just the Schiavo family, such as the people who worked at the hospice where Terri Schiavo was, the judge who was involved in the case, and even the elementary school down the block, which eventually had to close their doors and abandon the school because THEY were getting death threats. Insanity. There's a chapter on global climate change and the very, very real consequences one town on an island in northern Alaska. There's a chapter on the court case involving a small town in New Hampshire, the takeover of the school board there by religious zealots who tried to force the school system to teach "Intelligent Design." I had no idea about the details of that "incident" either. And, of course, no book on the stupidity of the American country would be complete without a chapter on how we got stampeded into a war in Iraq by a bunch of people who had always thought invading Iraq is a great idea, and the terrible events of 9/11 just gave them an excuse.

Unfortunately, this book just has further cemented my belief that this country is on its way down from our lofty perch we held during most of the 20th Century. We are becoming a nation of stupid. We cannot have intelligent debates. Everything is being played to the lowest common denominator. Where we once had visionaries such as Thomas Jefferson, Abraham Lincoln and Teddy Roosevelt, we now have George Bush, Sarah Palin and Michelle Bachmann. I guess I can only consider myself lucky to have seen the best this country has had and will not be around to see the final product. Whether that final result is a total and rapid collapse, or a long, slow slide into total irrelevance, I don't know. I don't really care. I just don't want to see what results out of decades of lunatics running the asylum.
Posted by zeppo at 8:28 AM