Highest resolution photo of Pluto yet. 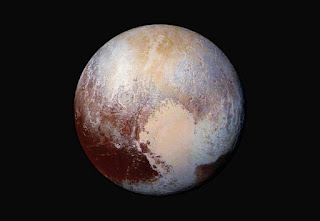 The colors are enhanced to bring out the different regions.  You can certainly see how different the black areas are from the white plains, named the Tombaugh Regio after the discoverer of Pluto.

My own little theory is that region is where the mini-planet suffered a "swipe by" collision of another body, and this collision resulted in the dwarf planet's moon, Charon.  In fact, I just read the Powers That Be that decide such things are considering designating Charon as a dwarf planet as well.  This is mostly because the two bodies orbit each other around a point in space called the barycenter that is not inside either of the two bodies.

So, Pluto and Charon may not be planets, but they are something else that is pretty special, our first known example of a binary dwarf planet system.  That's pretty cool, too.
Posted by zeppo at 8:40 AM