If modern birds are descendants of dinosaurs, I have a question regarding the evolutionary process.

First off, I do want to say that I am very dedicated to the scientific process in all subject matter, including evolution.  I actually love the concept that my chickens out in my pen that I keep for pets (and eggs) are somehow descended from dinosaurs that lived 125 million years ago.  I can watch them, how they move and run around, and imagine that is how small feathered dinosaurs acted.  Their eyes are especially interesting.  There is actually something very reptilian looking about a chicken's eyes.

So, I am not questioning evolution here.  I just have a question about the specifics that I actually have never seen answered before.  It involves knees.  Dinosaur knees.  Bird knees.  Specifically, which way they bend interests me.

Now, here is a picture of a modern ostrich.  Notice how the knees bend toward their rear, opposite of what our human knees do. 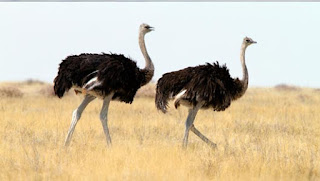 I picked an ostrich to illustrate because they have such long legs and you can see where their knees are quite easily.  All bird knees do this, they are just usually really short and it's difficult to make out their joints.

Now, take this illustration of a Deinonychus.  It lived around 110 million years ago and is related to Velociraptor of Jurassic Park fame. 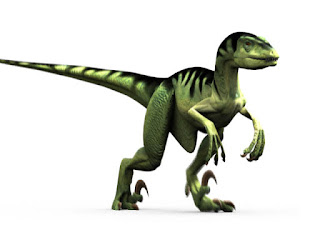 So, my question is this.  If dinosaurs to modern birds represents a direct line on the evolutionary tree, when and why did this transition take place?  I can't imagine a evolutionary step-change where an animal's knees just all of a sudden turned around in the other direction.  I also have difficulty imagining a slow change over time.  I am pretty certain we don't have any fossils of creatures whose knees bent out perpendicular to their bodies.  Could it have something to do when they started flying and that kind of leg made it easier to land in trees and such?  I don't know, but I wish I did.

I haven't made any kind of real effort to research this. But I do know that in all my readings on dinosaurs and modern birds, not only have I not seen an explanation of this, I have never seen this question asked before.  Yes, it would probably be helpful of me to go off an do some really in depth reading on this.  Maybe I have just missed something...  But it's an interesting question, don't you think?