I have it! Our crappy media isn’t due to bias or laziness. It’s due to food poisoning from Ergot of Rye ! 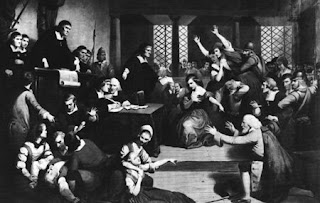 Here is my theory of what is going on in the media these days. I usually have a very high opinion of my original thinking, but I believe that I have outdone myself with this one.

My original thought was that, maybe after years and years of being bashed by the conservatives of this country for a real or imagined “liberal bias”, reporters, analysts, editors and owners actually have swung hardover in the other direction, such that there is now a CONSERVATIVE bias. Reporters and pundits alike would just take whatever is being fed to them by their government contacts and publish it as news or opinion. That certainly seems like what happens when Judith Miller, when she took all the stuff that Scooter Libby was feeding her and put it into the New York Times as actually reporting. Tie this in with the fact that major media outlets are now subsidiaries of major corporations whose interests lie in conservative policies and keeping the status quo, and you have what I thought to be a compelling case for why the media is doing such a terrible job of, you know, actually informing the public of what is going on in their names.

However, after hearing about how many cocktail parties that these media types go to where they gather and “chit chat” about whatever it is they chit chat about, I came up with a new idea. You know how, at cocktail parties, they always serve these stupid little “finger sandwiches” on that stupid flat, crunchy dark bread that looks suspiciously like it might be rye bread? It is now my theory that all these media types (except for Keith Olbermann) are consuming moldy rye bread infected with a nasty little fungus called Ergot of Rye. Food poisoning due to Ergot of Rye is thought to perhaps have been behind the madness that took over an entire town during the Salem witch trials. Here is an interesting speculation about Ergot of Rye.

"Today historians are speculating that some other bizarre events of the past may be due to ergot poisoning. For instance, an affliction known as "dancing mania" which struck Europe from the 14th to the 17th century may have been caused by the troublesome fungus. This phenomenon caused groups of people to dance through the streets of cities– often speaking nonsense and/or foaming at the mouth– until they finally collapsed from exhaustion. Sufferers often described wild visions, and continued to writhe after falling to the ground. Some also suggest that Kykeon, a popular hallucinogenic drink from ancient Greece, may have been made from ergot-infected barley."

See? Doesn’t it all make sense now? Doesn’t that describe people like MoDo, Bill O’Reilly and Michelle Malkin exactly? I mean, it all fits! “Speaking nonsense and/or foaming at the mouth?” “Wild visions?” Who can tell me that doesn’t sound like David Broder?

Our entire country is collapsing around our ears and our media won’t report on it (except for liberal bloggers, who apparently either don’t go to cocktail parties or maybe they don’t like rye crisps), because of a fungus! The obvious conclusion here is, of course, that people in the media should not go to cocktail parties and hang out with the people they are supposed to be reporting on!

If you read this story and start quoting from it, please make sure you give me proper credit for this groundbreaking theory. Thank you very much in advance. That’s z-e-p-p-o, small “z”.

Picture of Salem Witch Trials from here.
Posted by zeppo at 8:41 AM

Labels: government out of control, humor, insane people, media not going the job